Faculty members in the department of English and film studies created a petition that has now garnered around 1,900 signatures. 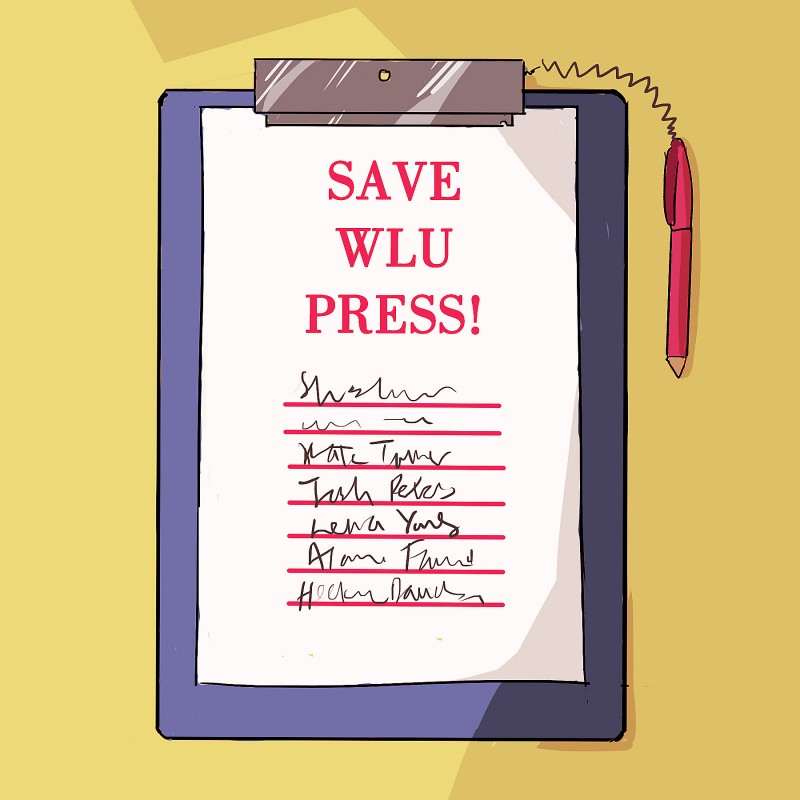 When Wilfrid Laurier University released the Integrated Planning Resource Management report in December prioritizing university programs and services, it reported that WLU Press, the academic publication, was recommended to “phase out or minimize.”

This recommendation, along with mention that WLU Press’ budget was going to be cut significantly next year, sparked concern within the academic community. Faculty members in the department of English and film studies created a petition that has now garnered around 1,900 signatures.

According to Ute Lischke, chair of the department of English and film studies, faculty were in an “absolute state of shock” when they found out about the recommendation.

“Laurier Press has been sort of a mainstay [for] promoting the university [and is] one of the major presses for promoting academic work,” she said. “It’s a real shame.”

The petition collected signatures from faculty, alumni, students, donors and other presses from across Canada, the United States and Europe, explained Eleanor Ty, a professor in the department of English and film studies. The goal was to make people aware of the impact of the publishing service.

“It’s not just the teaching that we do, but also our research is very important,” Lischke said. “I find that the press has always been a very significant window into Laurier and what Laurier does, and also profiling and making people aware of major academic issues through its publication.”

Ty said that there is an issue with understanding the value of WLU Press to Laurier’s reputation.

“Administration doesn’t really understand its importance and wants to cut it off before people have a chance to know what’s happening,” Ty said. “So we feel a petition makes it a public cause.”

The petition was sent to Laurier president Max Blouw on Dec. 9 with 1,100 signatures. Lischke received a letter back from the office of the president on Dec. 16 recognizing that he received the petition. In the letter, Blouw also acknowledged that the university is facing financial challenges.

“The budget that the administration has released is not necessarily the true financial situation as some of us see it,” Lischke continued. “So I think in the decision-making, they do have to realize that some of these activities are important enough to maintain.”

Tamas Dobozy, a professor in the department of English and film studies, explained that WLU Press is something about Laurier that “stands out.”

“When you have something at a university that stands out and is a sign of true excellence, it seems to me that that’s the very thing you should be preserving,” he said.

“For me, that was the reason behind the petition. Not because the IPRM process has run its course yet — it hasn’t. Not because the press for sure is slated for dismantling. We aren’t 100 per cent sure about any of those things … we just wanted to make it clear to the board of governors and those involved in making the final determination on the IPRM report that the press is really a significant thing.”

Ty believes many academic scholars know Laurier through WLU Press. She says the press is willing to change to market itself with the changing digital age, but needs time to do so. Ty, Lischke and Dobozy recommended a two- to five-year window for the press to sustain itself and still provide its valuable service.

“There are lots of people out there that do care about the press and we feel, for its budget, it is doing wonders for the university,” Ty said. “It’s not making money, but it’s adding value in terms of prestige, a place — it’s putting us up there with other presses.”

The fate of WLU Press and other programs at Laurier have not yet been determined. The recommendations in the IPRM report will be further discussed at Senate on Jan 12.

“We sincerely hope the Senate will take into account our objections to this and the board will also take it into consideration,” Lischke said.