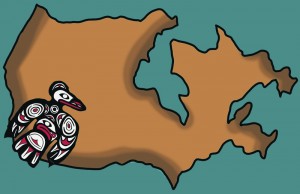 Towering trees, weathered beaches and mountain peaks along the horizon set Western Canada apart from its neighbours to the east. But along with these magnificent displays of the country’s diverse landscape comes the prevalence of an equally diverse set of people who offer a unique cultural aspect to the Canadian population as a whole.

First Nations peoples uphold a very noticeable presence on the coast of British Columbia, one that is not repeatedly so throughout the majority of the rest Canada.

However, a study done by Statistics Canada during 2006 revealed that the largest population of Canadian First Nations reside in the province of Ontario, raising the question as to why such a strong connection exists between British Columbia and Aboriginal imagery.

One plausible reason stems from the abundance of food that was available for the ancestors of Natives living on the Western coast of Canada. “It was really an incredible pantry, being able to hunt right next door in the forest while being able to fish in the ocean” remarked Walter Kohli, manager of Poet’s Cove Resort and Spa on Pender Island, an island off the coast of Southern B.C.

“Many of the prairie or interior people had to hunt almost full time…. These people here had a lot of leisure time so they could develop art.”

Kohli, originally from Switzerland, has surrounded himself with Native people nearly all his life. He is married to a woman of Aboriginal decent and even spent some time living in the bush with a group of First Nations people near Calgary, AB.

He has lived on Pender Island since 2008 and has tried to forge a connection between the resort and the island’s indigenous people ever since, even joining in a sacred brush ceremony in 2011.

Solomon Reece, a Tsimshain First Nation of British Columbia who works as a policy analyst for the B.C. government, supports this inquiry. “We had more time to develop more intricate clan systems, more unique language groups and we were able to really define ourselves materialistically a lot more than the East,” he said.

First Nations of Western Canada have also been able to sustain their culture for a longer period of time due to the region’s far more recent history of colonization. “My father comes from Northern B.C. and my mother’s actually Eastern Ojibwe from Ontario, so we’ve got a long history on my mother’s side of colonial contact while on my father’s side it’s within only five generations” Reece said.

Colonization marked the beginning of government for the young country of Canada, but the end of a life and land long-maintained by First Nations people whose culture suffered the threat of deterioration under the impositions of a Western regime.

This was the intention of the Canadian government in regards to First Nations during colonial times, working to create a standardized nation of like citizens without regard for an already existing and long established culture.

“We are all equals as human beings but we are not the same… so I think it is not overt prejudice, it is good intentions to say we are all the same in a Canadian’s mind. But to a First Nations person it’s denying their culture in favour of a very predominant culture,” remarked Kohli.

According to Kohli, the slow implementation of colonization across Canada, sweeping from the east made First Nations of the west cling harder to their roots.

“They could see what was happening to their culture elsewhere, learn from it, adapt and be more protective of it,” he said.

“Amongst indigenous communities there is a wary attitude, there is still a mistrust of anything Canadian,” said Reece. “We are very well known for our hospitality, we’d give you the shirt off our back. But, for example, even if I were to go home with my government badge on trying to get them to agree to something I would be met with the same hostility that anybody else would. There’s just a huge mistrust of government and everything that it represents.”

The lack of understanding from which this antagonism has developed can be attributed not only to a different idea of equality but to a contrasting idea of the world in general.

“Westerners have a more linear view of the world.… Now our language, our history and sort of our very philosophy is very much circular. So we don’t see that there is a beginning and end to anything, there is simply a state of being,” shared Reece.

According to First Nation beliefs, a person has no real death and exists forever in a constant cycle of connectivity.

“If you want to use a Star Wars metaphor, which I actually thought was very clever, it’s a symbiotic relationship. Everything that happens to every branch on the tree happens to the tree itself. We as indigenous people see our existence as intertwined with everything around us,” explained Reece.

“We believe that when we pass away our spirit leaves but our physical body is left behind and of course you bury it, it goes into the ground, the nutrients spread and eventually it goes into the grass which is eaten by the deer [and so on],” added Reece.

This is why a fairly recent occurrence on Pender Island, B.C. created such a negative stir among the island’s First Nations population. Poet’s Cove, which is situated on top of what was once a village belonging to the Tswout First Nations of Pender Island, went under reconstruction in 2004 unearthing ancient native remains. Instead of the incident being reported to the First Nations of the area, they were shipped off to a museum in Seattle.

“From their point of view it is something so inhuman and so insensitive because the First Nation ancestors are not finished… so to desecrate their remains is a horrible thing. It is kind of destroying their lives” explained Kohli.

So, on June 19, 2011 the remains were returned under the new management of Kohli for a proper burial.

This act of respect and correcting a past wrong is really exemplary of the progressive attitudes in B.C. towards the land’s original inhabitants.

“I think the steps that Poet’s has made to have a real reconciliation and talk about the real problems really shows the zeal in British Columbia at healing the divide between indigenous and non-indigenous British Columbians” remarked Reece.