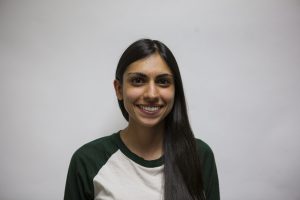 This past weekend, my girlfriend and I were at Chainsaw with a group of our friends.

Being together in public felt natural — her hand in mine, she leaned in to kiss me, when I realized a girl sitting at the table next to us had been staring intently at our affection.

Later in the night, we went to the bathroom together — like all good gay couples do — and we were discussing the girl who had been staring at us. My girlfriend and I have a habit of analyzing why people might be staring and whether their looks are positive, negative or indifferent.

We were in the middle of agreeing that despite the women’s intent, it felt right to be ourselves because for once we didn’t feel like the ‘token gays’ in the room, when the people in the two other stalls began to chime in.

The first lady yelled out, “Kiss her more!”

We laughed and as we began to leave, the second stall opened and out walked a middle-aged woman who motioned for us to come back inside. We did — and she said:

“Everyone is going to judge you no matter what, regardless of your sexuality. So just keep loving each other.

Her words, “Just keep loving each other,” have been echoing in my mind ever since.

Our experience at Chainsaw wasn’t a first — when we are out together, we have gotten stares and double takes. But each time my girlfriend squeezes my hand a little tighter, looks up at me and smiles reassuringly, even though I’m sure the pit in her stomach is just as present as mine.

I think there’s an expectation for LGBTQ+ couples to uphold this sense of confidence and pride and courage all the time if they are “out.”

But that’s so far from the truth. I’ve been confident in my sexuality for many years. But this doesn’t mean the long process it took to become confident in myself has translated into being confident in public.

It’s hopeful to think that, just maybe, there might be one person who sees us holding hands and develops the courage to one day do the same.

Just last month, we were at the mall and while we were holding hands, a pair of guys whispered as they walked by us and said, “Hey, they are holding hands.”

We looked at each other in fear — our first instinct was that we were being judged. But when I looked back at them, I noticed they too were holding hands. It’s moments like this and the one at Chainsaw that makes the process of being ourselves in public worth it.

But even more importantly, I’m lucky to have a girlfriend that makes me feel confident and safe to lean over and kiss her in public. I’m lucky to have her as a rock and to be able to feel her hand in mine when people stare. She gives me the kind of love and happiness that I shouldn’t have to hide.

It’s for that reason that I know my girlfriend and I will “just keep loving each other,” no matter who is watching.