Drake’s identity is going to be different for everyone – but he will always be a biracial, Jewish, Canadian hip-hop artist: An analysis of Drakes identity in HYFR

Graphics Editor, Jamie Mere, breaks down the identity of infamous Canadian music icon, Drake, and his impact on pop culture

Who really is Drake? While we all know of Drake and have an image of who we think he is, understanding his true identity is very hard to do. Drake has so many attributes and dimensions that it is quite hard to accurately depict who Drake truly is, but we know what defines him; he is a biracial, Canadian, Jewish rapper – an outlier within the hip-hop genre in which he is known to be an icon for. So, how are we as individuals able to trust Drake, and why have we continued to do this throughout his career?; bringing him fame and success on a national level, if we don’t know who he is? Well, that’s the interesting thing about Drake; his identity is different for everyone. Maybe it is Drake’s intent to showcase a range of identities in order to be accepted amongst the public and be considered on a national level, or maybe this fluid identity, is his true self.

Drake has grown his career over the years, as can be seen given his many accomplishments and awards from music shows such as the Junos, VMAs, AMAs, the Grammys, and more. Given all of this fame and exposure that we have to Drake, it becomes easily misinterpreted among society of who Drake truly is. In order to unpack his identity, understanding who Drake was before all of his success is a critical starting point.

This analysis will be dedicated to Drakes song HYFR in order to understand his identity at the intersection of religion and hip-hop. With a specific focus on Judaism and Drake, I have a unique perspective on this topic. Although it may be hard to believe, Drake is actually my third cousin; my grandfather’s first cousin is his mother Sandy Graham. In this way, I feel I can relate to him in two ways: as being a Jew, and in terms of his values and beliefs as I can consider family background and history, in addition to the overwhelming information that there is about Drake’s identity.

HYFR (Hell Yeah F***ing Right) was created in 2011, twelve years after Drake’s initial Bar-Mitzvah. Coming of age in the Jewish religion for males is at age thirteen, and Drake was twenty-five when they did a “re-Bar-Mitzvah”; this has many significant attributes. The video opens immediately with a home video of Drake as a young boy attending a cousin’s Bar- Mitzvah. After briefly showing an indication that the video will be a recommitment to his Jewish religion, we see young Drake dancing among family enjoying this event. The video then proceeds to modern day Drake in front of the Miami Synagogue, where the event of this religious ceremony took place. Following this ceremony, until the end of the video, we see Drake partying with all of his guests. Although this is a common way to celebrate a Bar-Mitzvah in the Jewish religion, Drake’s party can be considered anything but ordinary.

Miami’s temple president, Ben Kuehne, confirmed that Drake had been respectful in the synagogue in which the video was shot. He stated, “the video, lyrics aside, is an embracing of religious passage. It’s not a sacrilegious message; it’s not an anti-religious message.” This is important to consider in the analysis of the song HYFR as it is made evident that Drake really does care about his religion and takes this recommitment to Judaism seriously. Following the filming of the ceremony, however, the video correspondence of the ‘party’ was highly criticized in the Jewish religion. After president Kuehne had a chance to review the video and lyrics more closely, he stated that “the complete video is certainly not consistent with Temple Israel’s longstanding history and reputation as a progressive voice in the Jewish Reform movement. We do not adopt, condone, or sponsor any aspect of the Drake video, and were not involved in its production.” While it may have not been entirely up to par with the Jewish religion, Kuehne concluded that he hoped, if anything, Jewish youth would see this video at least as a reminder to ‘re-commit’ themselves to their Jewish faith.

In order to successfully stay true to the roots of hip-hop, Drake negotiates his cross- cultural identity using stereotypes, mockery, and mimicry in order to appeal to a variety of publics (McLeod). In HYFR, Drake’s choice to film and recreate this religious event in Miami may appear obscure, as Bar-Mitzvahs are events meant to be shared with family and friends. There are also evident contrasts in the party scene that we see in the home video of Drake in comparison to his recommitment: he is with other famous celebrities, and none of his immediate family. Drake’s choice to film in Miami and present the party scene the way that he does could be considered a ploy to bring mass awareness to this religious event, which may not have had the same power if filmed in Canada, and followed the ‘normalcy’ of Jewish tradition. These are two examples that serve as ways in which Drake subverts dominant codes of hip-hop authenticity to appeal to an array of public spheres. Drake’s relationship to America (filming the video in in Miami) in contrast to his birthplace of Canada, has made Canadians question why Drake did not choose his home country to recreate the event. In addition to his approach to of hip- hop and authenticity to its roots, as well as characteristics of the Jewish religion (often neglected/ disregarded in Drake’s other music) display stereotypes made to appeal to public at the international level.

Given Drake’s well known image and respect around the world, this song did not have a negative impact on his career overall. In fact, this song can be argued to be a reminder that Drake is still the same person who he grew up as, before anyone could define him as anything other then what he was: biracial, Jewish, and Canadian. The music video for HYFR explicitly shows us these facets of Drake’s identity, and the recreation of this religious event later in life, done so publicly in his career, can be considered a reminder that this is still a part of his identity. This event is very important for the Jewish religion as it signifies boys entering into adulthood, and Drake’s showcasing of his values in this ceremony later in his life (which is not common) shows he cares about religion and makes the effort to represent this aspect of his identity to the world. Although he does not do this often, it makes it no less significant. He is still biracial, Jewish, and Canadian.

Monica Miller’s work is critical to consider in this context, as she emphasizes how religion signifies in hip-hop culture. She argues that it generates multiple meanings for different social and cultural groups. Although Drake constantly negotiates his identity in order to stay relevant on a national level, I am able to feel a personal connection to him as an artist due to his ability to confirm who he is and where he came from in his music, even if done though mockery and mimicry. As mentioned earlier, Drake actually happens to be third cousin. This factor definitely has an impact on who I perceive him to be, and everyone is going to have a different image of Drake given their connection to him.

After considering HYFR and the interceptions of hip-hop and religion, it has become personally confirmed to me that Drake truly does have a care for his Jewish roots and does try to reflect this in his music when he can. While others may not see Drake in this same way, that is the great thing about Drake – he embodies so many personas. So many people can connect and relate to the themes that he portrays in his lyrics and videos, and because he is so respected nationally, it has resulted in him becoming popular worldwide. Even if Drake’s true identity is hard to depict and is different for everyone, given ample exposure, he always has been, and always will be, a biracial, Jewish Canadian; and HYFR exemplifies that exceptionally. 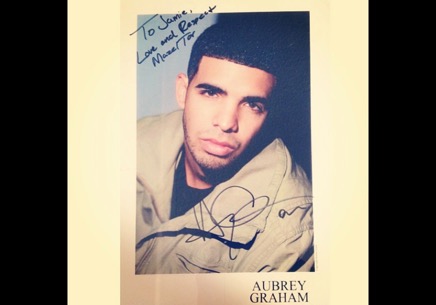 This is a gift that I got from Drake for my Bat-Mitzvah as he could not attend my party. This also confirms to me his care for religion.

Jamie is the Graphics Editor at The Cord and a fourth-year Communications student minoring in Education. She is awkwardly quiet, has a lot on her mind, and is filled with energy, similar to her pet bunny Miso. She is quirky and tries to appreciate the little things in life, and encourages peace among those who surround her. Engaging in creative outlets to express herself is a way for her to reach these goals. She also enjoys biking and late night snacking. Her new favourite tag line is, “Have a blessed day!!”