Amid sexual assault allegations, Bill Cosby will play Centre In The Square 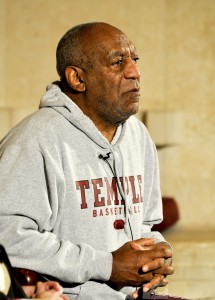 In the last few weeks, several women have accused famed comedian Bill Cosby of past sexual assault and rape. The allegations are dated throughout Cosby’s long career, from his beginnings as a standup comedian to his time as a sitcom father figure.

These allegations of sexual assault have greatly affected Cosby, who is currently on a standup comedy tour, and have caused many venues to cancel his shows, most notably on Nevada’s Las Vegas strip. However, Cosby’s upcoming Jan. 7 show at Kitchener’s Centre In The Square has not been cancelled and will be running as scheduled.

The Centre, which declined to comment, released a statement saying, “The Centre takes very seriously the concerns raised by patrons and the local community.” The Centre further mentioned that the show is a rental show, which makes them “contractually obligated to move forward with the show unless it is cancelled by the external promoter.”

Many in the Kitchener-Waterloo community have expressed mixed feelings over whether or not they would go see Cosby. Some feel that Cosby is still an entertaining figure, and that allegations should not take away from his art. Others feel that, although he may be entertaining, they would not feel right to go to his show.

“If I had tickets, because of the money I paid I would probably still go, but I wouldn’t be pleased with what Cosby was doing,” said Daniel Lee, a second-year student at Wilfrid Laurier University.

“I wouldn’t enjoy the show as much as I could, if this whole thing wasn’t going on.”

Some residents of K-W have been advocating for other events on Jan. 7 that could serve as an alternative to Cosby’s show. One such event is called Voices Carry, a fundraiser with a focus on supporting victims of sexual assault, largely organized and advocated by local radio host Mike Farwell of Country 1067.

“We may not know the women who’ve accused Cosby, but we know women here in Waterloo Region who’ve been harassed, abused, and assaulted, and we can stand with them,” said Melanie Baker, one of the organizers of Voices Carry.

The Centre’s main issue with the public outcry to cancel the upcoming Cosby show is that of financial need. In the aforementioned statement, the Centre declared “this show was contracted over a year ago with tickets on sale for a number of months. While we may personally share concerns raised by the community, if The Centre forces a cancellation of this rental show it isn’t simply a situation of giving back the rent.”

The statement went on to further mention that if they broke the existing contract with Cosby, they would need to pay him his guaranteed performance fee and pay his promoter damages due to box office losses.

“Mike Farwell publicized what he and a lot of people were thinking last week, both encouraging the Cosby gig’s cancellation but, as importantly, also wanting to use this as a positive opportunity,” Baker said.

“If the show at the Centre In The Square had been cancelled, we would have proposed putting on a show there and splitting proceeds with them and [Women’s Crisis Services of Waterloo Region] and [Sexual Assault Support Centre of Waterloo Region]. It wouldn’t have covered their losses by any means, but would be a show of support.”