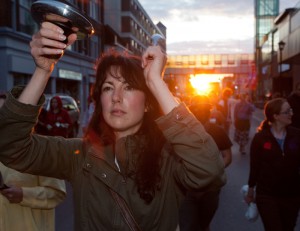 The ongoing movement in Quebec is starting to show itself in various parts of Canada, including Kitchener-Waterloo. Wednesday night, around 200 people took to the streets in Downtown Kitchener to show their support for the student protests in Quebec.

“It’s important for the rest Canada to show their solidarity for the students, poor and working class in Quebec,” said Charles Boyes, the Kitchener resident who organized the demonstration.

The “casserole” demonstration began at 8 p.m. at Kitchener City Hall and moved down King Street to the Kitchener Market where the demonstrators did short presentations explaining why they felt this was important. The participants banged pots, chanted “solidarity” and sported the red square that has been adorned by protestors in Quebec.

In addition to students at the demonstration, there were also families, local citizens and professors — some of whom are visiting for Congress 2012 — showing their support for what they believe is injustice in Quebec.

“It is important because of the [Bill 78] that they are proposing, it’s something that takes away to assemble and free speech, the standards in any kind of democracy,” explained Herbert Pimlott, a communications professor at Wilfrid Laurier University who joined in the demonstration.

“Students are expected to get degrees in order to make themselves available for economy, then I think it’s the responsibility of the economy.”

Many of the supporters in Kitchener were also from Quebec or have visited Quebec in recent weeks. They were strongly encouraging the rest of Canada to become more visibly upset about the cost of education in Canada.

“We’ve been on strike for three months now, it is encouraging to see [them] involved,” said Marie, a visitor from Quebec who declined to give a last name.

“[Ontario] has the same problems, if not worse.”

A student from McGill University also took the opportunity to say a few words when the crowd settled down, and encouraged the students of Ontario to begin mobilizing and to start sending a message to the Ontario government.

In response to those who believe Quebec shouldn’t be protesting because their education costs have been traditionally cheaper than the rest of Canada, one person shouted, “They fought to keep that way and they will continue to fight.”

While the demonstration did halt some traffic, it was peaceful. Waterloo Regional Police Services were on scene, but did not intervene.