Waterloo resident Bobby Besant may only be 23, but he has already helped to launch his own business, appeared on Dragon’s Den and crafted his own beer, which is slowly making its way to the shelves of the LCBO.

Waterloo resident Bobby Besant may only be 23, but he has already helped to launch his own business, appeared on Dragon’s Den and crafted his own beer, which is slowly making its way to the shelves of the LCBO.

“Ever since I was a kid, I have always wanted to be an entrepreneur and do my own thing,” Besant said. “My dad was an entrepreneur as well so I was always talking to him about business growing up.”

Besant is one of three co-founders of Crazy Beard, the other two being Daniel Bartek and Cam McDonald.

The idea first came to life when, as part of Western University’s business school program in 2013, Besant had to come up with an idea for a consulting project on what he wanted to do for a business. After receiving some criticisms from his professor, Besant, Bartek and McDonald made it their goal to strengthen this idea.

Their initial idea had transformed into the product they have today.

While Crazy Beard is comparative to ciders such as Somersby, there is a great deviation. According to Besant, the natural apple flavour is similar to most ciders, but it is less sweet. 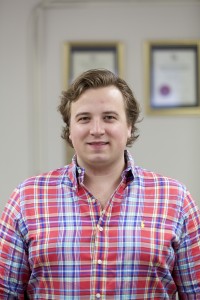 “It’s a hybrid between a cider and beer. It tastes like a cider, in that it has that apple taste and that aroma to it, but its actually made with a malted beer base. Crazy Beard has a quarter of the sugar that a typical cider would have,” he said.

“All of those other ciders have about 40 grams of sugar and we’re about 10. It’s less sweet, but also less acidic because its made with beer instead of apples.”

The taste isn’t the only thing that stands out to consumers. The unique name of was chosen to pay homage to today’s popular bearded trend, according to Besant.

“We wanted a name that spoke to a culture and a way of life. Beards are obviously a trend a right now.”

Contrary to the name of their ale, neither Besant, Bartek nor McDonald have beards. Besant said he lives vicariously through his ale.

“I can’t really grow a great one right now. If I could grow one I could,” he said.

While Crazy Beard is slowly making its way into the LCBO and The Beer Store, Waterloo residents can find cans at several stores, including the LCBO in uptown Waterloo and on Columbia Street West and Fisher-Hallman Road North.

Thus far, Crazy Beard has been well received according to Besant.

“We’ve gotten a lot of good feedback, especially because its light to drink. It’s fun to go on Instagram and see the hashtag from people we have no ties to commenting on it and saying that they liked it,” he said.

Besant and his team also had an audition with Dragon’s Den, which is set to premiere March 11. While he could not share the results of the show, Besant was willing to comment on what he sees in his future as an entrepreneur.

“Its sometimes tough to be a fortune teller but I will say that I think that [my co-founders and I] who are running Crazy Beard right are in it for the long-term. Whether the long-term is five, 10 or 20 years, I don’t know the answer to that,” he said.

“Long-term wise, I always see myself working for myself. I tend on sticking with this company through whatever we end up doing.”