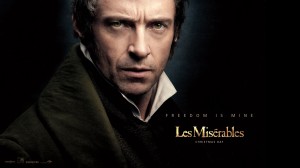 Hugh Jackman better brush up on his Academy Awards acceptance speech. His poignant performance in Les Misérables has made him a shoo-in to win. Yeah, I just went there.

As someone who had previously played Eponine in a staged version of Les Misérables in the past, I was hesitant about whether or not this film would move me as much as the play had. I am glad to say that I was wrong. Director Tom Hooper beautifully re-creates the original Broadway musical about the entangled lives of the characters during the French revolution.

For those who are unfamiliar, Les Misérables centers on Jean Valjean (Jackman) a man imprisoned for 19 years for stealing a loaf of bread to feed his nephew — and then, trying to escape that hellish incarceration. Under the watch of duty-driven lawman Inspector Javert (Russell Crowe), Valjean endlessly labours until he is granted parole and sent out into the streets as a beggar and pariah. He is taken in by a kind bishop (veteran Les Misérables actor Colm Wilkinson), and is awarded a chance at repentance.

Eight years later, Valjean reinvents himself as a successful businessman living under a false pseudonym. However, fate intervenes when he crosses path with Javert. Destiny intercedes a second time when Valjean crosses paths with Fantine (Anne Hathaway), a young woman cast out of his factory who has since turned to prostitution in order to send money to her daughter, Cosette, who is living in the “care” of thieves Thénardier (Sacha Baron Cohen) and Madame Thénardier (Helena Bonham Carter).

In Fantine, Valjean recognizes an innocent soul he has wronged, and pledges to save the woman’s daughter — even at the cost of rekindling Javert’s unyielding pursuit of him. After that, the story broadens into a sweeping epic of romance, morality and politics, as Valjean raises Cosette (Amanda Seyfried) as his own, until she falls in love with Marius (Eddie Redmayne), a young nobleman-turned-revolutionary, thus entwining the fates of all the players with the political cataclysm-taking place in the streets of France.

Hooper conveys an inimitable film adaption, having his actors singing live and throughout the entire film, rather than have them lip-sync. This achieves the desired effect of making the musical experience more immersive and natural in terms of actor performance and tactile response to the environment and other cast members.

However, at times, this method of performance does make for some awkward tuneful phrasing where spoken dialogue would’ve been much appreciated. Hooper’s direction of Les Misérables is fittingly epic and gorgeous, bringing nineteenth-century France alive with captivating production designs and impeccable costumes, and many familiar set pieces from the award-winning stage play are brought to life in such vivid new dimensions that it’s hard not to feel as though you are seeing the story again for the first time.

Certain sequences are mastered effortlessly, such as the epic barricade battle, seen as the rising action of the film. Certain images are ineradicable works of art in motion. One does not fail to notice the simplistic and even haunting imagery seen in the opening and closing sequences as well as the fate of Javert. What really pulled this film together were the incredible performances of the actors and actresses cast into the film. The most notable are Jackman, Hathaway as well as newcomer Redmayne.

Jackman gives likely the best performance of his career, playing the tragic hero Jean Valjean. Not only does Jackman have the charm and musical talent to play such a demanding role, but also he immersed himself into a role of a conflicted man trying to do the right thing throughout the film. When Jackman first appears on screen, don’t be surprised if you don’t recognize him at first; he is not afraid to get a little ugly for a role. If Jackman doesn’t get at least an Academy Award nomination, I certainly would be shocked.

Hathaway, though her character’s appearance is succinct, manages to steal the show and leave viewers reaching for another box of tissues. She went through drastic physical changes to suit the role of a dying and desperate mother (she actually had her head shaved in one take for this movie!) and tearful circumstances makes audiences feel like they are invading her pain, which in turn makes them feel helpless to save her. I have one challenge for future audiences: I dare you not to cry when Hathaway sings, “I Dreamed a Dream”. Go ahead, I dare you.

Previously enchanting audiences with scandalous philanders with Michelle Williams in My Week With Marilyn, Redmayne’s handsome looks and charm captures the audiences’ attention immediately, but soon reveals his dimensions of talent during his and Seyfried’s proclamation of love in the garden. Whether you love him for his musical talent, his believable portrayal or his attractive visage, Redmayne finds a way to make you remember him.

A disappointing performance comes from Samantha Barks who plays Eponine, the daughter of the Thénardiers who also harbours a secret crush on Marius. Barks had previous experience playing Eponine on Broadway, making me wish that she had brought more to the character than she did. While I may be biased with my own experience playing the character, it seemed that Barks lacked the poignancy that I assumed would be present in her songs and her wishful encounters with Marius.

If Les Misérables is not one of the movies that you are planning on seeing this holiday season, you need to change your mind. While musicals are not for everyone, one can appreciate the beauty that Hooper had set up (and casted!) into the film. It’s best to see this movie now before Academy Awards season arrives: you need to understand what all of the hype and fuss is about before all the nominations and awards come rolling in.