Waterloo Regional Police Service held a press conference this morning where the total amount spent by community partners during the Ezra Avenue street party was disclosed.

The total combined amount spent on various services in the region reached $713,500 this year. In a tweet following the press conference, these costs were described as “not sustainable.”

A media release from the City of Waterloo described the breakdown of costs as follows:

“The City of Waterloo, Waterloo Regional Police, Region of Waterloo Paramedic Service, Wilfrid Laurier University an the University of Waterloo participated in a collaborative effort to address activities related to St. Patrick’s Day,” Jaworsky said at the beginning of the press conference. “As previously reported, this year saw the largest turnout ever, with an estimated 22,400 people partaking in an unsanctioned street event party, primarily on Ezra Ave. in Waterloo, as well as some other surrounding streets.”

“For some time now, we’ve been concerned about the growing size of this particular unsanctioned event, and for the safety of those who participate, as well as the broader community,” Jaworsky said.

Jaworsky described the increasing problem the city has had with outside visitors attending the party. 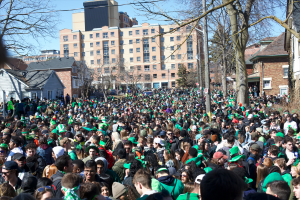 “Many of the people who attended [the Ezra street party] are locals, however more are visitors,” Jaworsky said. “We have been a welcoming community and that will never change, however, people who come in and join in this unsanctioned event are not welcome.”

Jaworsky described these outside visitors as “one of the primary drivers for the increase in cost to respond to this event.”

“These people are not invested in the well-being of our community and aren’t concerned with the impact that their behaviour has on our community,” Jaworsky added.

“Clearly the growth of this event cannot continue, and is not sustainable or good for our community in this form.”

Jaworsky noted that the long term goal for the region is to encourage students and attendees to celebrate St. Patrick’s Day in licensed venues and private residences. Jaworsky also noted that the region would be switching from an operational approach to one that was more strategic:

“For the safety of the community, and to manage our combined financial resources, we need to move from an operational [view], and to bring in a key strategic approach to this issue.”

Following this, Jaworsky announced the formation of a “Public Gatherings Task Force” to be overseen by the the City of Waterloo’s Town and Gown committee.

“The Town and Gown committees mandate is to develop and enhance relationships, communications and policies among universities, college students, the city, police and community,” Jaworksy said.

According to a press release from the City of Waterloo, “Recommendations [from the task force] will be focused on achieving three outcomes: reduce (one-to-two years), refocus (two-to-five years) and prevent (five years plus).”

“The goal of the task force is to understand the student and crowd behaviour in order to develop strategies, initiatives and programs that can be used to reduce, refocus and prevent these unsanctioned public gatherings from escalating to a point where public safety is potentially jeopardized,” he added.

Jaworsky continued to describe some of the goals of the task force, which he said would be completed by “a third-party consultant or an academic institute.”

“This work includes studying crowd behaviour,” he said. “We need to understand the contemporary student mindset related to large public gatherings … we need to better understand what part of large gatherings appeals to students, and what alternatives could be provided.”

Ultimately, Jaworsky described an effort to “create a sense of belonging and connection with students to our city” in order to insure “that their behaviour is more respectful towards neighbours and emergency personnel.” 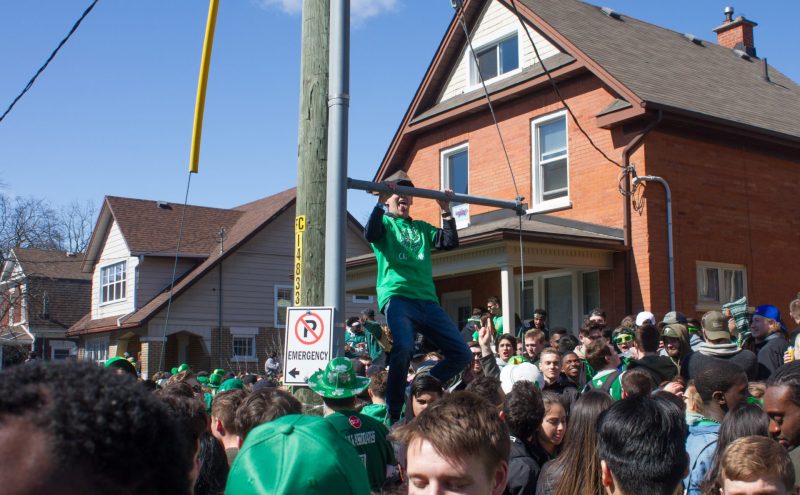 Jaworsky also noted concerns held over student binge drinking — particularly with regards to Canada’s upcoming cannabis legalization — and commended Laurier’s Students’ Union and UW’s Federation of Students for both their participation in the planning surrounding St. Patrick’s Day and also “for taking a strong leadership role around the health risks associated with binge drinking.”

“We need to understand the mentality behind it and be prepared for the impending cannabis legalization. We need to raise awareness and enhance the education around the risks of binge drinking,” Jawosrky said.