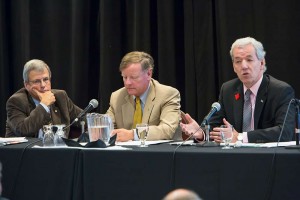 Last Thursday, Wilfrid Laurier University and the University of Waterloo held a conference at the Waterloo Inn, entitled Perspectives on Academic Freedom. The conference gave academics a chance to come together and discuss issues surrounding the topics of academic integrity and academic freedom. It also allowed for a moderated discussion regarding the Balsille School of International Affairs (BSIA).

The second panel, titled Governance of the BSIA: A Three Way Partnership, was carried out by both Peter MacKinnon from the University of Saskatchewan, and Jim Turk, president of the Canadian Association of University Teachers (CAUT), and was moderated by Jeffery Simpson from the Globe and Mail.

In this panel, MacKinnon stressed that academic freedom is limited by donors who want to control their funding after it has been given.

“For many faculty members, collaboration within industry is not optional,” he said. “[And] we should be careful not to put restrictive barriers in their way [of researching].”

He also explained that the lack of trust in university administrations is an ongoing issue.

“We are suspicious of these collaborations and we don’t trust university administers to manage them,” he expressed. “If I were an industrial leader seeking university collaboration, and if I were faced with these [CAUT] guidelines, enshrined in policy, I would run for the hill.”

MacKinnon went on to explain he believes there are too many ambiguities within the CAUT guidelines, especially in regards to power structures between universities and donors.

However, Turk turned the panel around by addressing issues of academic integrity rather than academic freedom.

“Waterloo and Wilfrid Laurier have jeopardized their academic integrity in agreeing to certain provisions of the donor agreement, and the governance structure of the BSIA,” he stated.

“When a university agrees to something that is a problem, it is not the donors problem, but the university’s.”

He went on to explain that both the donor agreement and the governance documents used by the BSIA, and approved by the universities, are problematic, and jeopardize both school’s integrity.

“It is not appropriate for a university to allow a donor, or a donor’s organization, a voice in academic decisions that include structure of faculty-chair positions, the structure of graduate fellowships or the selection of faculty,” he stressed. “[But] there is a solution: it is called revising the donor agreement and revised governance documents.”

Gary Rhoads, director of the center for the study of higher education at the University of Arizona, delivered the keynote speech, which addressed solutions for both WLU and UW in regards to their situation with BSIA.

Rhoads gave international examples of how universities overseas are able to co-operate with their donors without facing any issues that call into question the notion of academic freedom or integrity.

He concluded by suggesting that those involved within BSIA have regular discussions, and clearly outline how their partnership will continue to function in order to insure both WLU and UW maintain their academic freedom and integrity.