A voice for a new generation 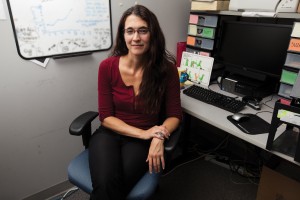 Anne Wilson, a psychology professor at Wilfrid Laurier University, is now an inaugural member of the Royal Society of Canada’s College of New Scholars, Artists and Scientists.

Wilson, along with other selected scholars, will constitute the college — the first of its kind.

The Royal Society of Canada’s College of New Scholars, Artists and Scientists aims to appoint distinguishable scholars regardless of their age, background and gender.

Members serve as a “voice” of the new generation of Canadian academics who mentor young scholars about issues in research.

“One of the purposes of this new college is to really try and open it up to more diverse population … and that can really contribute to bringing energy to these discussions and talking about things with different scholars at different stages of their careers,” Wilson said.

“So for me, it is an honour to be nominated by Laurier to be one of the first members of this society.”

Wilson focuses on topics that hold societal importance, such as racism, homophobia and climate change.

Being in the college will allow her to make connections and bring research to a wider public domain. Wilson also hopes to contact with government agencies, policy makers and the public.

“First make these interdisciplinary connections and put me in contact with other people … it can be a way of finding that link between the research lab and the real world and ways to communicate this research to the real world,” Wilson explained.

She also says that this society will allow her to broaden her connections within the community.

“It is also a mechanism by which we can communicate with the research that’s going on and make sure that the broader society is aware of,” she said.
Wilson hopes to bring expertise within her field to the table in this inaugural committee.

“I’m very grateful to Laurier, for the support they’ve given me in putting me forward. As a researcher, it’s always nice to have institutional support and knowing that the university is behind you makes a big difference,” said Wilson.