Youth volunteering on the rise in Kitchener-Waterloo 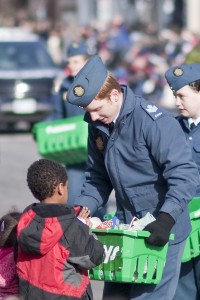 The number of young adults and university students who volunteer in Canada are surpassing expectations.

A 2010 study issued by Volunteer Canada revealed that 45.2 per cent of volunteers were actually aged between 24 and 34. In addition, 57.6 per cent were university educated.

While there is currently no holiday-specific information as to how many students are donating and volunteering during the season, Dianna Boston-Nyp, a representative from the Volunteer Action Centre of Kitchener-Waterloo, believes that youth are greatly involved.

“In the past seven years we’ve been working on a provincial campaign funded by the ministry of citizenship and immigration who run a youth volunteering challenge,” she explained. “It’s a four-week campaign and we had about 950 youth involved in about 25 different programs that we capture in the campaign.”

“That’s probably not all of the youth volunteering that’s going on, but it’s a snap shot,” she added. “Youth volunteerism has increased.”

Boston-Nyp went on to explain that many volunteers are actually high school students age 14-18.

“That may be because of the designated 40 hours that schools have imposed in recent years,” she said. “But that’s of course affected the numbers of youth volunteerism.”
She went on to explain that there were some challenges affiliated with having youth and student volunteers.

“I think the main issue that I’ve heard is that they’re not patient with the process [and] that they don’t realize that it requires good, clear communication,” she said. “Sometimes they don’t take it seriously, too.”

Boston-Nyp also commented that sometimes younger volunteers are also disengaged because they are not using their skills best to their ability.

“Sometimes we find that volunteering to not be of interest because of what volunteer managers are doing is giving students very menial tasks and not always looking into their capabilities,” she said. “But I think we’re getting better at that.”

“We’re in a changing world where we really need to reach out to youth and have them bring our organizations forward and there’s a lot more of that going on.”

Peter Thurley , the media and communication manager at United Way Kitchener-Waterloo explained that in his experience, most volunteers are of an older demographic.

“It’s mostly driven by adults,” he said. “We haven’t had any noticeable student populations.”

He went on to explain that United Way has chapters amongst university campuses, with many students participating through those outlets.

“We’ve been really excited to see how active they are at raising money,” he said. “Its nice to see how energized they are.”

When asked about whether university students are particularly engaged in volunteerism during the holiday, Thurley explained that he felt students were relatively active.

“A lot of students get out, get active, get involved; it’s part of what makes K-W a great place to live in,” he said. “Some of the other organizations in the community have seen more volunteers on the front line.”

“We’re seeing a lot of students who can really help us with aspects of reaching out to other youths and engaging in more meaningful ways,” she said “There is an opportunity for those to identify with a cause that they really like and they tend to stick around.”