Your guide to summer patios

Why you should go: Ethel’s is the dive of all dive bars, but that’s why it has a special place in all of our hearts. Their patio has a decent amount of seating and is the perfect place to go for after work drinks. For everyone who has come to Waterloo from a small town, Ethel’s definitely has that small town, poorly kept bar feel, but that’s why so many people love it. It feels like home.

What to order: Taco Tuesday at Ethel’s is a reason to look forward to Tuesdays. You can get four tacos for a toonie, with the purchase of a drink. This is a starving student’s paradise. You can’t live in Waterloo without experiencing Taco Tuesday. 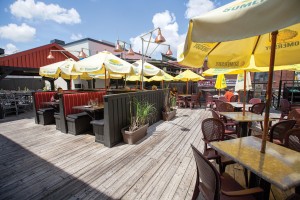 Why you should go: The Huether’s patio is hands down the best patio in Waterloo. It’s raised, so you don’t feel like you’re eating your dinner on the side of a busy road. Umbrellas and a retractable roof also nicely cover the tables. If you burn easily, the Huether allows you to eat outside while also saying safe from the sun and protects you from any summer showers.

What to order: The Huether has awesome mixed drinks that are served in adorable mason jars. My personal favourite is the cranberry mojito. For all you beer drinkers out there, The Huether is home to the Lion Brewery as well, where awesome in-house beers are offered daily. As far as food goes, their spinach and artichoke dip gives Wilf’s a run for its money and is definitely worth a try.

Why you should go: Famoso’s patio is small, but because it’s located on the side of the building, there is a sense of seclusion from the hustle and bustle of King Street. The patio is well kept and the sleek glass fencing gives it an upscale feel. This patio is minimalist, but sometimes those are the nicest ones.

What to order: Famoso is a pizzeria, so if you aren’t craving pizza, it may not be your best option. They offer awesome lunch-sized pizza and salad combos. The best pizza I have had so far was just the Quattro Fromaggi (four cheese). It’s served with a lemon wedge and is perfectly light for summer.

Why you should go: Beertown’s patio is right in the heart of uptown Waterloo, but once again, is far enough back from the street to offer customers a sense of privacy. Beertown’s patio also has picnic tables, which gives it a casual, cottagey feel without having to leave town.

What to order: Beertown has an extensive beer list, so if you go, expect to be offered beers that you may have never heard of before. This is perfect if you like trying new things, but their beer can also be a little expensive because most of it is imported. My recommendation is to start off with a paddle, which includes a few small samples of different beers so you can be sure of which one you like. As far as food goes, I order the warm cheese dip and pretzel board almost every time I go to Beertown. It’s an awesome appetizer that’s perfect for sharing. Beertown also has a few different taco choices on their menu, which make the best summer lunch.

Why you should go: Bobby O’Brien’s patio is basically a playground for adults. There’s an outdoor bar, live music and even beach volleyball. Its location is very centralized to downtown Kitchener, making it an easy stop while bar hopping.

What to order: Bobby O’Brien’s hosts Taco Tuesday, a night that is very near and dear to all university students. On Tuesdays, you can get two tacos for $5. They also have other student-friendly deals including a free pound of wings with the purchase of a drink on Fridays.

Why you should go: Although it’s a bit of a trek from the Laurier neighborhood, the patio at Moose Winooski’s is phenomenal. They have tables with actual fire pits in the center and an outdoor bar. There is also tons of greenery, so even though the Moose is in a fairly commercial part of Kitchener, there is still a Northern Ontario cottage feel.

What to order: The Moose has fantastic food. Their menu offers three different kinds of poutine as well as a wide variety of sandwiches and burgers. My personal favourite is the buffalo chicken sandwich. This sandwich makes it worth the drive. 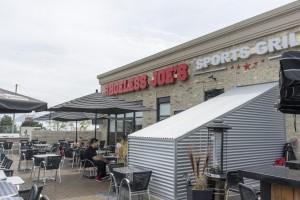 Why you should go: The patio at Shoeless Joe’s is awesome. It’s on the top floor of the restaurant, so it’s actually a rooftop patio that overlooks the central hub of the Laurier community. Being high up definitely offers more seclusion and privacy, while also cancelling a lot of the street noise.

What to order: I’m not a huge fan of the food at Shoeless Joe’s. It’s extremely mediocre, quickly prepared and chain restaurant food. In my opinion, skip the food and just go for an afternoon pint or cocktail and soak up some of those rooftop rays.

Why you should go: Morty’s is a classic Waterloo favourite and is known for their good food and cheap beer. Their patio however is far from special. It’s right on the street, making conversations difficult. There is also a bus stop right beside the patio, so you could be eating your dinner right beside someone who is waiting for a bus. It’s slightly invasive. Morty’s patio kind of feels like you’re in a fish bowl with everyone watching from the outside. The only reason I would visit this patio is for the great food and beer, not the atmosphere.

What to order: Morty’s wings are legendary. If you haven’t had them, you need to get some as soon as possible. They offer their wings at a discounted price twice a week, on both Monday and Thursday. They also have a burger special every Sunday, which is worth checking out.