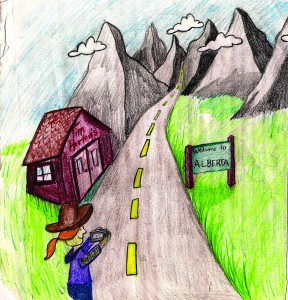 David Docherty thought something was missing from Canada’s universities.

So Docherty began exploring the possibility of an exchange program with another Canadian university, and sure enough he found a familiar partner in his endeavor — Wilfrid Laurier University.

Docherty, who graduated from Laurier in 1984, began teaching political science at his alma mater in the early 1990s before being appointed dean of arts in 2005. Docherty took the job as president at Calgary’s Mount Royal last year.

“It was something I had been thinking about, not necessarily related to Laurier,” said Docherty. “And then Laurier and Mount Royal had a joint alumni event in Calgary and [Laurier president] Max [Blouw] said in his remarks ‘this is the start of a good relationship and should grow to include student exchange.’

“So in my remarks all I could say was ‘Max you beat me to the punch.’”

The agreement, signed by the two universities in early August, will allow students from one school to complete a term at the other in a situation both Docherty and Laurier registrar Ray Darling described as very similar to a semester abroad.         Students would pay tuition fees at their home institution, but ancillary and service fees at the school where they are doing their exchange.

The program is open to students from all disciplines and initially the universities’ goal is to have four students from each school participate in the exchange each year, though both Docherty and Darling said that the number is flexible.

“We wouldn’t limit ourselves to four if we had more than that interested,” stated Darling.

“If there’s student demand for it, that’s great, we would adjust the contract. It’s just to have some controls in place so, as I said, one school’s not taking on more than the other.”

According to Darling, who has previously worked at the University of Guelph, this kind of agreement is almost unheard of.

“Normally exchange programs are international or you’d have them with Québec because it was to do with French-language learning, but I’ve never seen one that’s between two English-language universities,” he said.

Docherty sees the partnership as an opportunity for the two universities to contribute to building national unity within Canada.

“I understand Alberta a lot better now that I’ve been here for 13 months than before we moved out here. I think we’ll understand more of the country if we spent more time in different parts of it. If this is one small way that universities can help build the country, rather than pit it against itself, why shouldn’t we be doing it?“