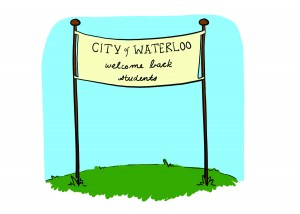 Despite the, at times, drunken and aggressive nature of students, their return brings many financial benefits to Waterloo’s business community.

Upon their return to school, some have made the assumption that the student presence will lead to brawls at the local bars and nightclubs and frequent visits from the Waterloo Regional Police. However, that is not always the case.

With the arrival of students comes the return of booming business at local bars and nightclubs. Ryan Good, owner of Chainsaw Saloon, claimed that his venture is a renowned “student bar” that does not get as much business from students during the summer. The volume of student customers that enter the bar ranges between 60 to 75 per cent.

Like many others bars, Chainsaw does occasionally deal with students who attempt to sneak in with fake IDs, or the infrequent theft or vandalism of public property. However, Good still holds the student business in high regard.

“In the ultimate scheme of things, it’s minor compared to the benefits that we get from students,” Good said.

“We’re thankful for the students. Chainsaw basically survives because of the students,” he continued. “We wouldn’t be in existence without the students.”

Waterloo Regional Police Inspector Kevin Thaler agrees that there are incidents throughout the year where police have to be called in for a student situation, such as underage drinking and rowdy parties.

Thaler argued that it is the students’ vulnerability to their new environment that makes them susceptible to trouble, not their antagonism.

“With the pressures of being a student, some things get overlooked, such as leaving doors unlocked, which result in thefts in the dorms, houses and vehicles,” Thaler said.

“But to say that all students are belligerent is not correct.”

Thaler shared that the Waterloo Regional Police anticipates the conventional party events throughout the year, such as O-Week, Homecoming, and St. Patrick’s Day, and are sure to provide more assistance and resources to the community during these times as a safety precaution for both the students and the permanent residents.

“The permanent residents should expect parties that cause some noise throughout the year. But should they expect loud parties all-year round? No,” Thaler shared.

“But new students should also realize that it’s not a free pass for them to get in trouble. There should be a two-way street for students and residents.”

Second-year Wilfrid Laurier University biology student Jennifer Hinton had noticed that while students do drink, attend parties and go to bars, things tend to quiet down by the beginning of October with the quick arrival of midterms, assignments and finals.

“For Frosh Week, that is usually when things get really crazy sometimes, and that’s because it’s a week of fun and there’s nothing to worry about seemingly,” Hinton said.

“But it’s the next week when school starts that they start to take school much more seriously, because they know midterms are coming up soon and things quiet down.”

As a don, Hinton witnessed her students take advantage of their newfound freedom from home.     Once school has started and students are being given their midterms dates, they begin taking school much more seriously, proving that education is ultimately a bigger priority than going out.

“There are only the select few people that go out, not the whole school like some people assume,” Hinton said.

“I find that most people are actually too busy studying to go out, so I think that most students aren’t a problem.”

Waterloo region permitted to progress into step two on Monday

Inequity at the board table: three students’ union directors quit in under two months

Waterloo region permitted to progress into step two on Monday