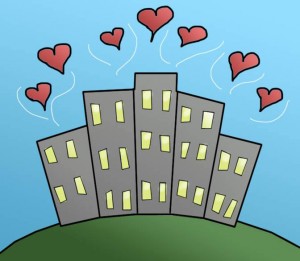 Valentine’s Day is quickly approaching, and with it comes the celebration of relationships. Some choose to surprise their significant other with chocolates or flowers, while others choose to curl up with a good book and some decide to party it up on the town.

Many people tend to indulge in consumerist items that elicit romance or passion in their lives.

“Our rankings were compiled by comparing sales data from Jan. 1, 2014 to Jan. 1, 2015 on a per capita basis … based on purchases that included romance novels and relationship books, romantic comedies, a collection of romantic music, sexual wellness items and jewelry,” said Katie McFadzean, public relations manager at Amazon.

“I think it’s really disturbing that Amazon would even attempt to measure romance through the purchase and consumption of goods,” she said. “Now I am led to believe that romance is an artificial creation just to stimulate the economy.”

She argued that the most romantic purchases aren’t cliché Valentine’s gifts, but instead show your significant other you really care about their interests.

“Romance and gift giving is about showing a person that you know who they are and that you pay attention to the details about them,” she continued. “How can Amazon track that?”

“I strongly feel it is wrong and invalid to determine how romantic a population is based on how much money they spend on cliché items,” he said. “It’s apparent that Amazon attempted to analyze their consumer trends and struck out on their conclusions.”

However, Waterloo mayor Dave Jaworsky, believes that romance is a part of the equation of a thriving city.

“We are a great mid-sized city with lots of places where people meet up,” he said. “We have over 50,000 students in Waterloo … perhaps they are going out, meeting new people and forming new and possibly long-lasting relationships.”

Jaworsky described his ideal day with his wife to consist of a bike ride and a picnic — an act of romance that does not involve the consumption of cliché goods.

With Valentine’s Day just around the corner, it’s up to the residents of Waterloo to decide if the city does in fact cater to romance.