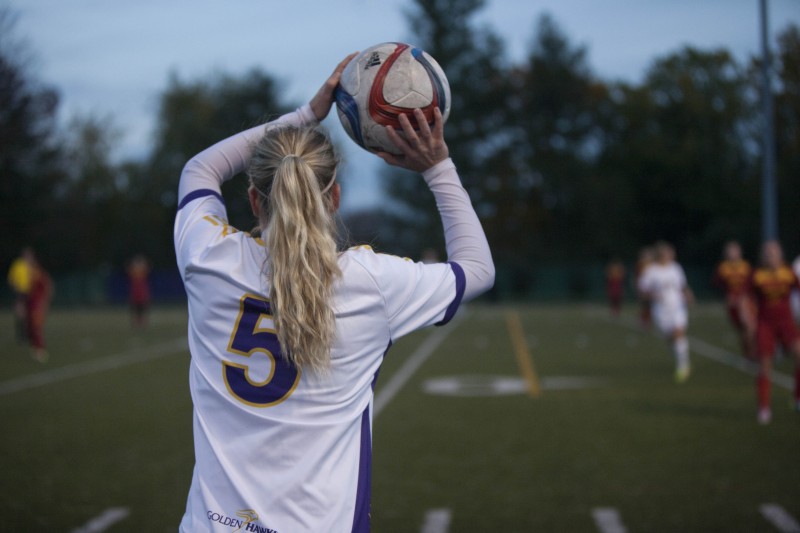 Despite being plagued by injury all season, the Wilfrid Laurier University women’s soccer team secured second place in the Ontario University Athletics West division last weekend, receiving a first round bye and they will also host the quarter-final next weekend.

The Hawks won both of their games against the Guelph Gryphons and Brock Badgers last weekend, passing the Western Mustangs to take sole possession of second place. Laurier has finished either first or second in the OUA West every year since 2009.

The Hawks have not been playing at 100 per cent all season, yet they still produce results.

“I was pleased. We needed to get those two wins to take care of [the playoff bye], so, I’m happy,” head coach Barry MacLean said. “I’m happy to get the bye, and I’m happy to play home field for the second game, it’s all positive.”

With the win, Laurier is able to rest their multitude of injuries and fine-tune during a week of practices, as they do not have to play a midweek playoff game.

The team is haunted by many injuries affecting key players like Maxine Murchie, Nicole Lyon, Julie Karn, Kassia Hayek and Pauline McCordic. Each player has missed some key playing time over the last few weeks.

This gives the Hawks more time to get healthy before a major playoff game. According to MacLean, capturing the first-round bye game is a priority to give the Hawks more preparation time.

“It’s always a priority. Not playing that [first round] game, it’s an awkward game and the parity in the league is so great you don’t want to have to play that game,” he explained. “Always playing your first game at home and then playing  against a team that’s already had to play is a positive so for us it’s great.”

MacLean said the club will focus on having upbeat, intense practices for the first half of the week and then prepare for the team they are playing against in the last three days, which gives them more flexibility and allows them to do things that they would not be able to do otherwise.

MacLean reassures the team will be prepared to face their opponent, whoever they may be.

“We’ll be prepared to play whoever we have to play and we hope we get everybody back from injury. We’ve had countless injuries, we’ve lost so many men to injuries and we got a lot of players that are touch and go for the weekend,” he said.

The Hawks will await their opponent while they prepare to play in front of their home crowd on Sunday Nov. 1 at 1 p.m.

The winner will punch their ticket into the OUA Final Four championship, with the top two teams advancing to the Canadian Interuniversity Sport national championship later in the month.