The value versus the price of textbooks 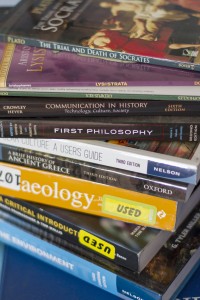 Textbooks are expensive. This is a reality for most university students no matter what school they attend and the same exists for those at Wilfrid Laurier University. More controversially though, is the efficacy of those textbooks, especially in relation to the marks they help students achieve in courses.

“I have an 11.6 [grade point average] and through five semesters of school I have read a total of two textbooks,” said third-year business student Andrew Paylor.

“I have spent in the ball park of $2,000 for textbooks. Money that could have been put to much better use.”

This sentiment is not limited to the school of business and economics. Numerous arts students interviewed reported doing less than 60 per cent of readings for many of their courses while still achieving desired marks.

“Most of the courses I take require you to memorize the textbook for midterms and exams. And a lot of that information isn’t really applicable afterwards.”

However, many professors do put considerable thought and time into the selection of course resources.

“I’m sensitive to how much things cost,” said Sofy Carayannopoulos, an associate professor of policy for SBE and coordinator of BU111.

For BU111, students have to purchase a lab manual for $64 and a physical textbook that comes with an electronic access code for $94. For a more economical option, the access code for the online resources could also be purchased separately for $54.

“I’ve tried to create a lot of value for them,” said Carayannopoulos. “The lab manual, because it’s primarily my own work, I’ve tried to avoid paying royalties to others to keep costs down for the students.”

The kind of effort put into the selection and creation of the materials for BU111 can also be found in other departments in the school.

“We went about selecting that through a fairly lengthy process. We, being the film studies faculty, offer three first-year film studies courses and we didn’t want students to have to purchase a different textbook for each class,” said Katherine Spring, associate professor of English and film studies.

Both Spring and Carayannopoulos commented on the relationship between lecture content and the content in textbooks for first-year classes.
“Students do well, especially at the first-year level when they are exposed to the same material two or three times,” Spring explained.

Spring specifically touched on how this changes depending on the student.

“Students with good study skills, who take notes during lecture and rewrite them so they retain them, might have found the textbook extraneous,” she said.

Despite the large costs for students to purchase complementary textbooks, Spring suggests that all professors do put effort into their decision-making process.

“I’ve never met an instructor who didn’t think carefully about which textbook she or he used,” she said. “I think to assign a textbook and then ignore it completely … puts students in the position of having to buy an expensive text that they’re not responsible for reading.”