Stumbling out of the gate 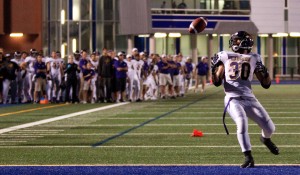 Two games. Only two touchdowns. No wins. Something is wrong here.

The Wilfrid Laurier University men’s football team may need a miracle just to make the playoffs — something that hasn’t been a problem in almost ten years — after losing their first two games of their eight-game season.

After being shut out 19-0 by the Toronto Varsity Blues last week, the Hawks came home to host the No. 6 Queen’s Gaels last weekend hoping to improve the faltered offence.

But had no luck.

Laurier only managed to produce two touchdowns against Queen’s, losing 42-16 and dropping to 0-2 on the season.

“It’s honestly something that we should be getting every single drive we’re on the field because that’s what offence is supposed to do,” fourth-year receiver Alex Anthony said after Saturday’s game.

“We’re supposed to score and we’ve got two touchdowns the past two weeks, which is not good enough.”

The Hawks went six and a half quarters without a touchdown before Anthony found the endzone midway through the third quarter on Saturday, when the Gaels were already leading 29-2. Alex Sanchez scored the second touchdown, but didn’t connect until there was a minute left in the game.

The Hawks’ offence just hasn’t shown up. And in the unpredictable OUA, they know that can be lethal.

“We’re still making too many errors,” head coach Gary Jeffries said. “You can’t win in this league with the mistakes that we’re making.”

It’s not that the Hawks didn’t compete. The defence held Toronto to a very low-scoring game, and it took Queen’s until halfway through the second quarter to really break free, aided by some of the mistakes Jeffries mentioned.

“It was an even football game until, you know, we turned it over and gave up a big one,” Jeffries said. “And next think you know, it got away from us.

“Defence is playing awesome and offence just has to step it up,” Anthony said. “That’s all it is.”

Laurier quarterback Travis Eman only had nine completed passes out of 21 attempts, while his Queen’s counterpart Billy McPhee went 22 of 28 for 333 yards and two touchdowns.

Toronto quarterback Richard Quittenton completed 16 of 25 passes against Laurier, while on that night, Eman only managed eight completions out of 27 passes.

“The score kind of reflects it,” Eman said regarding his performance against Queen’s. “Could have done a lot better.”

Eman came to Laurier after transferring from the NCAA’s Furman University due to personal reasons. Although his skill is evident on the field, the chemistry between he and his offence has not yet been developed.

“We’re shooting ourselves in the foot,” Eman said. “We came out really well and were firing and we were moving the ball. But again, stupid mistakes and penalties.”

It may be early in the season, but with only six games left, the Hawks are already in a dire situation that requires them to fix many of their problems immediately in order to contend for the playoffs.

“Everyone keeps saying that it’s a young team and we’re rebuilding, but it’s just mental busts,” Anthony said. “Mental busts and dropping passes. That’s honestly all it is.”

“I think we just need to come out here and focus more and catch every ball that’s thrown to us.”

The Hawks are not necessarily doomed. They currently sit eighth in the OUA standings due to point differential, and are capable of winning their next four games.

But to make the playoffs, they must win. And to win, they need offence.

“It’s a quick fix,” Eman said. “We just need to focus more and everybody focus on their own job. If we do that, then we’ll be better.”

Laurier will have a chance to mend the broken pieces when the York Lions visit on Saturday. In what is almost a must-win game, the Hawks will look to pick up their first win and keep their season alive.

But you can’t take anyone in this league for granted.

Last week, York stunned the Ottawa Gee-Gees when they walked away with a 47-36 victory. The Guelph Gryphons also surprised the Windsor Lancers 28-9, knocking them out of the Canadian Interuniversity Sport (CIS) Top 10 rankings.

“I’ll tell you what,” Jeffries said. “York is a good football team. The quarterback they brought in is outstanding. They’re much improved.

“It’s a tough league. There are a lot of good teams. You have to be ready.”
Jeffries was also anything but definitive when it came to who will get the start for quarterback against York.

“They’re both good quarterbacks,” he said regarding Eman and Steven Fantham, who replaced Eman in the fourth quarter of Saturday’s game. “We’ll see. We’ll have to look at the film.”

Laurier will meet with York, Ottawa, Guelph and Waterloo before heading on the road to battle always-toughWestern and the defending Vanier Cup champions, the McMaster Marauders.