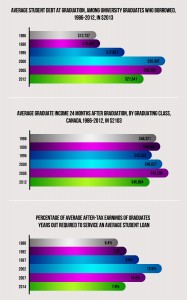 Is the burden of student debt simply a myth?

According to Alex Usher, it might be more complicated than that.

“An average student with average debt is less burdened today than they were in previous years,” Usher explained to The Cord.
Usher is the president of the Higher Education Strategy Associates (HESA) and recently published a study outlining the declining trends of student debt.

His research indicates that the average student is taking out smaller loans, has lower interest rates and has less tax on their earnings. This—in theory—would make it easier for students to pay off their loans compared to previous years.

“That’s not a student aid policy but it is better than it used to be,” said Usher.

Since the recession of the early 1990s, student debt roughly doubled between 1992 and 2000. However, since then, student borrowing has leveled off since 2009.

Another factor Usher referenced as evidence of the decreasing burden of student debt is the average income a graduate makes. Using provincial surveys to indicate what the average person makes upon graduation, his research determined that 24 months after graduation, the average Canadian is making $45,894 a year.

Usher also emphasized that an increase of student aid, government bursaries and scholarship programs have helped ease up loans and debt.
“If you take the increase of grants in admission and the tax credits, take the increase in money to encourage parents to save, take all the money that universities are putting in scholarships right now, you’re putting in about a $4 billion difference between now and the mid-to-late 1990s.”

“And that’s significant, that’s a good thing,” Usher told The Cord. “We should celebrate the good things.”
However, some skepticism of Usher’s findings has arisen — especially from students.
Hilary Canivet, a Concurrent Education student at Brock University explained that her debt is not considered average and she will be unlikely to pay it off any time soon.

“As an aspiring teacher I will not be able to pay off my $40,000 in debt in a short time once I supply teach,” she said. “I think that if you walk into a job that has the average income listed that’s great, but what about the lack of jobs in specific fields?”

Stephanie Muzos, a recent graduate of Wilfrid Laurier University took out a $20,000 loan to fund her teacher’s college. However, she also received a grant from the Ontario government that reduced her debt by $5,000.

“I don’t consider my loans average,” she admitted. “My plan is to pay off my student loans by September 2014, but when I look at my friends some are in debt worth over $35,000.”

Usher, however, explained that his research was not suggesting that student loan itself was a myth; he was simply comparing debt burdens today to previous years.

“I’m sure everyone would like it if the burden was lower now and I’m not disputing that,” he said.

He continued, “Pick your poison, I’m not saying disregard debt as a problem, I’m saying let’s look at the progress that we have made and go from there.”