Strangers are worth talking to 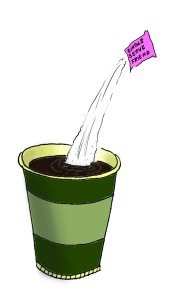 The general social rule to not talk to strangers can be a hard one to follow. Although it is clear to stay away from those who may pose threat or danger to our lives, the act of fully ignoring our neighbours—whether they be the neighbours sitting next to us at a coffee shop or travelling on the bus—should not be a write off.

What happened to the good old days when conversing with strangers was a natural and completely normal habit? Whether it was because you need some help or they had a question to ask you.

The narrator in Fight Club brought up one of the most uplifting definitions of making friends with a stranger; usually one that you will never see again. They’re “single-serving” friends. Like a packet of sugar you put into your cup of coffee, they serve the purpose of being useful only once and never being re-used again.

A single-serving friend functions in the same way as a sugar packet. You meet them at that one specific spot, converse in something, maybe share a story or two or help them out. You part ways and never see them again.

Engaging in this type of relationship may seem pointless to most. Why talk to someone you don’t know when you can bury your face in your phone and shut people out with your headphones. If a stranger dares to speak to you or ask a question, the word “sketchy” or “creep” pops into your head. You instantly shut off your connection with another human being and carry on with your day. And people complain about rudeness, I wonder why.

The shift to a digital age filled with technology that becomes more portable and mobile has enabled us to get information quickly, also enabling us to shut ourselves out from real-life interaction. When someone breaks the barrier of causing a stranger to look away from their phone and talk, it can often lead to the person immersed in their technology to be startled and confused.

However, talking to strangers does have its benefits. We humans are made to interact and be social. It’s in our genes, it’s how we communicate and shape our visions of society. We posses specific anecdotes that others may not. And if the timing is right, you may end up getting a reward.

The amount of times I have benefitted from taking the time to help someone else on the street has resulted in me moving forward. The best example is when I was at the back of the line at Toronto International Film Festival (TIFF) waiting to go into the theater.

A woman, nervous and a bit confused, came up and asked me a question. Since I had my headphones in, I had the opportunity to just ignore her but I put my iPod on pause and answered her. Five minutes after speaking with her, her spouse called and said that he had gotten to the front of the line and that she should come meet him. She turns to me and goes “Hey, come join us!” and I ended up skipping 200 people in line and got the seat I had so deeply desired.

The same goes with anything if you’re in a public area. If you are nice and more approachable, people will be significantly friendlier and feel inclined to help. This ranges from fruitful conversations, to even snagging a free drink when I didn’t have enough cash on me to pay.

While it’s easy to shut ourselves off from everyone else around us, sometimes taking the time to unplug and engage with strangers can have benefits. I guess the saying “respect thy neighbour” really does hold value.
letters@thecord.ca