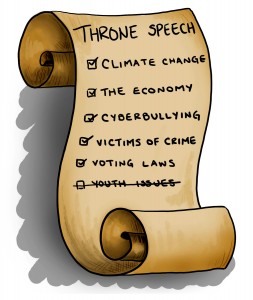 One of the longest on record, the Speech measured at just over 7,000 words. It touched mostly on popular issues including job growth, economics, safe communities and the armed forces.

Of potential concern to university students and young adults is the fact that the speech mentions the word “youth” only three times. All three usages occur in the section proclaiming the government’s positions on job growth.

The tough economic conditions facing many young Canadians are a topic worthy of discussion. However, the singular focus on jobs misses some of the big picture issues, namely certain aspects of youth engagement with civic and political life in our country. It is no secret that a stereotype of the millennial generation is a lack of engagement in civic and political issues.

A recent report by the non-partisan research group Samara, entitled “Lightweights? Political Participation Beyond the Ballot Box,” challenges that notion.

The report further revealed that Canadians aged 18-34 were less likely to participate in what Samara classified as formal engagement in political life. Formal engagement includes activities like contacting elected officials, attending a political meeting, volunteering in an election campaign or belonging to a political party.

The Samara report indicates that young Canadians do participate in civic and political life. The participation is simply of a different nature than traditional notions of  formal engagement with civic life.

What the Conservative Party is missing, as far as the big picture of youth connection with political life, is how to interface a new generation of voting-age Canadians with formal democratic structures.

Many young Canadians have an understandable frustration with formal political life in Canada. There is a tangible dissatisfaction with certain aspects of our first-past-the-post electoral system, noticeably the fact that a party can form a majority government without winning the popular vote.

And then there was the Throne Speech. A 7,000 word address that included three usages of the word youth, all of them related to jobs, compared to over five hundred words dedicated to the government’s grand plan for a 150th birthday party, in a year when they may not even be in power.

No one denies that jobs are important, and that the economic situation for many young Canadians trying to find work could stand some improvement. The youth of Canada, however, are not merely material to fill the economic needs of this country. The generation coming of age now has much more to offer, especially in the everyday life of communities.

A turning point has been reached in the way young Canadians engage in political and societal life, but that does not mean that such a palpable energy cannot be harnessed into renewing interest in the everyday governance of our country.

The Throne Speech and the opening of a new session of parliament presented a chance to begin this renewal. However, the government should recognize that the speech, in regards to tackling important youth issues, was a missed opportunity.