Returning with a purpose 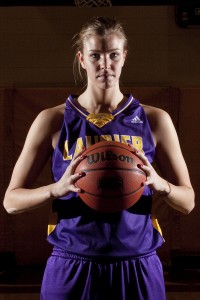 One couldn’t ask for a better start to the season.

In her season debut, fourth-year women’s basketball centre Whitney Ellenor scored 34 points throughout the Concordia Tournament, and was named the “all-star MVP” for Wilfrid Laurier.

“Yeah, it wasn’t too bad. I was a little surprised honestly,” Ellenor said regarding her performance. “I didn’t think I would do that well. It was great — just to get my confidence back more than anything.”

But before then, Ellenor was in no way in game form at the beginning of the 2013-14 campaign. She spent the entire first half of the season with a walking boot, after breaking her ankle in two places during the preseason.

After she started to rehabilitate her ankle, Ellenor was finally able to do conditioning to continue building its strength.

“Once I was able to put some weight on it we did some balancing exercises; first just standing on my one leg, trying to get the stability back in it, and I would touch the ground in different spots while balancing on that leg. Sitting on a trampoline. [The trainer] would also massage and stretch out my calf because I was having a lot of pain there with everything tightened up,” she explained.

Being out for so long had an impact on the fourth-year centre, who was entering her second full year with Laurier, but she kept herself motivated through time and patience.

“At first it was a little bit hard, but as soon as [the doctor] said, ‘you can walk on it now’ or any little accomplishment that I had or any little gain was such a big motivator for me to get back on the court. Especially sitting there and watching the girls practice every day, that was so hard for me. I just wanted to be back out there with them,” she said.

And Ellenor made a statement.

Along with her 34 points, she also added 20 rebounds and six blocked shots while capturing all-star MVP for Laurier at the tournament.

“That was my goal from the beginning,” Ellenor said on returning during the tournament.

“I wish I could’ve been back sooner, but Jen [Childs, Laurier athletic therapist] and I had to sit down and make a realistic goal that we both agreed would be within my reach. We worked really hard for that.”

“I wanted a couple games in before we had to play Windsor so that I wasn’t jumping back into it, for Windsor.”

Currently, Windsor sits atop the Ontario University Athletics (OUA) West standings with a stellar 11-1 record. In Ellenor’s 2013-14 season debut against the Lancers, where Laurier lost 73-44, she scored seven points and one rebound while claiming back a starting position.

In a dramatic 74-73 win against the Western Mustangs, Ellenor had four points and two rebounds.

When repositioning her focus, Ellenor had only one thing in mind.

“To not hurt the team,” she laughed. “I wanted to come in and contribute, even if it was just as little as possible. I really wanted to focus on defence and stopping the post players.”