Religion and science connect through conference 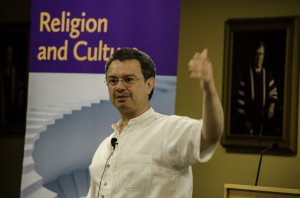 This year’s focus was on how relationships can be created between the two disciplines.
“We really wanted to open up the contact between religion and science,” said Christopher Ross, associate professor of religion and culture. “There’s been a deepening conflict in recent years being publicized in terms of revival of what I think is old-fashioned atheism, in response to people’s appropriate anxiety to religious fundamentalism.”

Drawing on the research of several professors at Laurier, the conference had speakers from a variety of different faculties within the university. Ranging from biology to religion, all the speakers presented their own perspectives and research that pertained to the discussion on religion and culture. Ross saw the speakers as a gateway to open up the exchange of ideas.

“We wanted to open up a conversation about the different kinds of contact that is possible between religion and science, and bring in a variety of people from different points of view, practicing science, which are evolutionary.”

Ross also added that the call to focus on religion and science this year came from recent discussions on the topic.

“We’ve had a series going since 2000 and we have a different interface of religion with some facet of public life. This year we thought it was timely to do science, because of the Richard Dawkins and Christopher Hitchens debates that have arisen in recent memory.”

Ross said that he found this year’s conference “very stimulating.”

“Speaking personally, I left Friday night with a real validation for what we do in the religion and culture department. What’s interesting is that most people don’t realize science occurs in a culture, so I felt it was a real validation as to what we within the department are up to.”

Lizzie Rigotti, a second-year PhD student in the religious diversity in North America program, thought the conference opened up some great discussions.

“It was very interdisciplinary, which I think is a great opportunity for people to come together and asks questions we don’t often talk about.”

Rigotti believes that events like the conference allow students to discover new perspectives of how to look at the world.

“This is where students can come to think about how to move forward in their studies, and see what really interests them. Where professors can show people parts of their research and reach outside of the classroom to more of the general public.”

The only limitation Rigotti pointed out about the conference was the lack of time for the discussions to carry on longer, although she realized the need to have a time limit in a conference.

Ross thought the kind of discussions that occurred during the conference was a good sign of the cooperation that can occur between religion and science.

“What has been rich about this time is that there is different contacts between science and religion, that it doesn’t have to be conflictual. I think in the conference we have experienced moving with and towards a bridge between the two disciplines.”