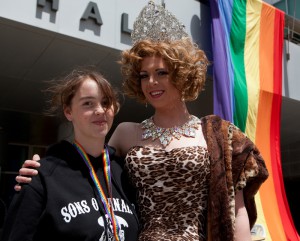 Last week from May 24 to June 3, Cambridge, Kitchener and Waterloo celebrated the 16th tri-Pride Festival. Tri-Pride is a celebration of the LGBTQ (lesbian, gay, bisexual, transgender and queer) community in the area and is open to the public.

In a phone interview, co-chair Alex Chunaco discussed feeling “blessed that [the tri-Pride festival] had a very great team this year” and was proud of everything accomplished by the board of directors and volunteers involved.

The LGBTQ community in Cambridge, Kitchener and Waterloo is growing, and this year to start off the festival Cambridge City Hall raised the Pride flag. “It was the first ever flag raising ceremony in a City Hall in tri-Pride’s history,” shared Chunaco. “[It is a great] way to foster community within the Region of Waterloo.”

Tri-Pride is very “family and community focused and that’s what makes it one of the most successful Prides in the nation,” Chunaco continued.

To promote that tri-Pride is also for families, Sunday May 27 encouraged rainbow and ally families to visit Waterloo Park for an afternoon of fun-filled activities and cupcakes. Chunaco said the afternoon was an opportunity for families to build their networks and meet new people. Meanwhile kids had the chance to participate in a rainbow scavenger hunt, storytelling and a community art project.

The most anticipated event of the week was the Live Music Festival, on June 2. Having outgrown Victoria Park over the last few years, the tri-Pride organizers moved the event to Kitchener Civic Square on King Street to better serve those going to the festival. Acts included Drag Queen and King performances, the Eastwood Collegiate Fiddlers, Josh Zuckerman of St. Louis, Missouri, Ayr, Ont. native Kate Reid and many other talented performances.

According to Chunaco, over 6,000 people attended the events over the course of the week and volunteers and sponsors were eager and a great help.

“We also had the tri-Pride community awards, which recognizes individuals within the community,” said Chunaco. This year’s awards went to Sue Weare, a 2011 Laurier graduate and the Communications and Outreach Coordinator for the Waterloo Region Rainbow Coalition for “OUTstanding Individual” and Spencer Small, who stood before the Waterloo Region Catholic District School Board to ask them to reconsider their stance on Gay-Straight Alliances, for “OUTstanding Youth”.

“The community has supported our team,” Chunaco concluded. And Chunaco, along with the members of the board of directors on the tri-Pride committee, were very pleased to have the week go over so well and proudly say they are “one of the largest [Pride] festivals” in the province.