Volunteers had to complete 7 mandatory training modules during the summer to prepare for O-Week.

With a week packed full of events, services at Wilfrid Laurier University have been working to ensure students are kept safe throughout Orientation Week.

Accordingly, during the summer conference they were able to move straight to having conversations about safety rather than having to do training.

“We were able to have a more full conversation, I’d say, because students already knew the information — they were prepared for having that debrief and then it was a more rich conversation because of that,” said Heather Gaffney, vice-president of programming and services at the Wilfrid Laurier University Students’ Union.

Emergency Response Team is available 24/7 during O-Week. They have 33 volunteers on staff, 30 of which are trained as first responders.

This year, they trained five volunteers in May, which is earlier than usual, so they could have a larger staff for O-Week.

“It should be a better week than last O-Week, because last O-Week we were a few people short because we didn’t do that training,” said Jordan Brazeau, ERT coordinator.

In preparation for the week, Brazeau said they do a refresher training session so volunteers remember how to deal with an intoxicated student, for example.

“A lot of it comes down to making sure you don’t escalate the situation by agitating someone, for example,” said Brazeau. “Because if you’re drunk and you’re underage, you’re scared of people who you think are authority figures.”

During O-Week, ERT will have one team constantly stationed in the office or patrolling campus, ready to be dispatched if there is a call.

For most of the week, there will be one team with each colour group. For the On-Campus Celebration Tuesday night, there will be 22 volunteers on duty.

“A lot of it comes down to making sure you don’t escalate the situation by agitating someone, for example,” said Brazeau. “Because if you’re drunk and you’re underage, you’re scared of people who you think are authority figures.”

“[Three] years ago, when the ‘93s were in first-year, they were pulling ambulances from Guelph because it was so busy,” Brazeau said. “So we really try to do overkill for OCC, just in case.”

Brazeau said that many of the calls they get pertain to anxiety because it can be a stressful week for first-years. With Shine Day on the Saturday they are also taking extra precautions.

While ERT is participating in Shine as a committee, they will also have a team on shift.

“For closing ceremonies we’re bringing 12 volunteers,” Brazeau continued. “I’m concerned about first-years getting up early, doing Shine Day, it could be hot, and then coming to closing ceremonies, maybe drinking in the meantime. It’s going to be a long and exhausting day.”

Foot Patrol provided walks during summer conference and during boot camp prior to the start of O-Week to help volunteers become more familiar with their services.

In terms of the week, Foot Patrol coordinator Shawn Pederson explained, “At all the different events we’re going to have people placed outside the venues. Just in case when they leave they see someone they can either grab a walk there or they can still call in or drop by our office.”

They have 50 to 60 volunteers working during the week. During OCC, there will be additional volunteers pitching in to provide walks. 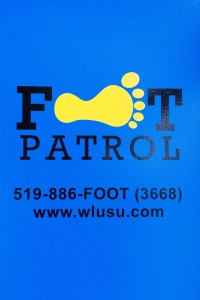 Tammy Lee, manager of Special Constable Service, and her team have been working more closely with partners this year. They will be going around to each of the colour team headquarters to give safety talks on the Tuesday night before OCC.

“We want it to be a memorable experience for them,” said Lee. “But just be respectful of everyone else as well.”

This year, SCS also had a joint training session with Residence Life and other representatives from the region and campus.

“Just really how our department can be more involved and make the transition easier for the students,” said Lee. “Everybody working together was really the focus.”

Much of the focus, Lee continued, will be put on OCC. She said their message to students is that everyone has the right to enjoy their O-Week.

“Wherever a student’s interest lie on the spectrum, just be considerate, respectful and understand everyone has the equal right for enjoyment,” Lee said.