After closing out their season with a dominant 7-0 victory against the Brock Badgers, the Hawks finish second behind the Western Mustangs, earning the playoff bye game. 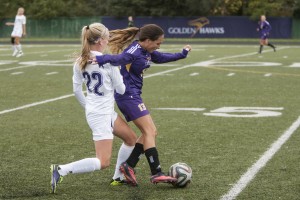 After closing out their season with a dominant 7-0 victory against the Brock Badgers, the Hawks finish second behind the Western Mustangs, earning the playoff bye game.

First-year midfielder Nicole Lyon picked up a natural hat trick and fourth-year striker Emily Brown picked up her 21st goal of the season against Brock. This was a milestone for Brown.

Brown’s goal tied her for first in the Ontario University Athletics scoring list, and ties the OUA modern day record with 63 goals in her career.

The Hawks also defeated the Guelph Gryphons on Oct. 15-2-1. They end their season with a 12-1-3 record — the best record they have finished with in the last five years.

“It’s a huge thing, you get the week and prepare for a game but also finishing first is huge because you would avoid York or Western in your first playoff game. The results on the weekend are big,” he said.

With the top three teams in the OUA West being so close on the standings, separated by only two points between them, it was imperative for the Golden Hawks to win their final game in order to secure the playoff bye. According to McLean, beating Brock meant that the Hawks finish no lower than second place.

Lyon stressed the need to return to basics when making a deep run into the playoffs and finding success.

“We definitely have to stay calm. In a couple of these games we start to rush things and take some of our opponents lightly. We have make our passes on the ground and do the simple things and I think that’s how we’ll have our success,” she said.

According to McLean, the Hawks haven’t been playing the game that they normally play, which he hopes will return in time for their quarterfinal game.

He noted that there will be a lot of work that needs to be done in preparation for the playoffs this coming weekend.

First-year Julie Karn is working hard to get herself ready for next week. According to Karn, it’s crucial for the Hawks to play as a team and getting back to playing their game.

“I know everyone really wants it so I think we’re going to really come together especially getting into playoffs and play it simple, passing and give-and-go’s,” she said.

To Karn, the keys to success are working hard in practices, and taking every game seriously. Regeneration is also really important.

By securing second place, the Hawks will play the York Lions if York wins their playoff game against the McMaster Marauders.

If McMaster upsets York, Laurier will play the winner between the Windsor Lancers and the Guelph Grypons.

The Hawks are 5-0-1 against these potential playoff opponents during the regular season.

The Hawks will play their quarterfinal match at University Stadium on Sunday, Oct. 26. The girls take to the pitch at 1 p.m as they begin their journey to defend their OUA championship.