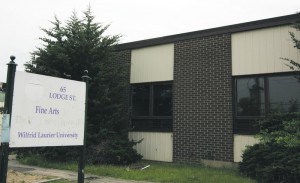 The old Fine Arts Building at Wilfrid Laurier University will see a new purpose in the upcoming year.

The building is currently being used as a warehouse, but the university will introduce a new environmentally-friendly building called the Centre for Cold Regions and Water Science to take its place.

The application for the establishment of the centre as a headquarters for environmental and hydrological research in northern Ontario and other northern Canadian regions was originally proposed in 2008, though due to budget constraints, the project has only come to fruition in recent years.

“[The project] was supported by the Canadian Foundation for Innovation, but not by the province,” said Bill Quinton, an associate professor and Canada’s research chair within the geography and environmental studies department.

The result was an official ten-year partnership between WLU and the government of the Northwest Territories, who collectively provided the funding for the infrastructure for research.

At Laurier, this infrastructure has come in the form of a focused research centre equipped with laboratory facilities, analytical equipment, offices, meeting rooms and the like.

The Northwest Territories will be the base for fieldwork, receiving equipment such as weather stations and various all-terrain vehicles.

The Northwest Territories is experiencing a process of devolution in its transition to provincial rank, meaning that the territory will be taking on more serious responsibilities.

As such, concerns are arising around the issues of water quality and transboundary flow of water and related resources.

The idea of the partnership is for the Northwest Territories to adopt policies with a scientific backing, established by coalitions of WLU researchers and researchers native to the territory itself.

“Researchers can’t really do their research without the compliment of graduate students, so the Northwest Territories is looking to the students at undergraduate and graduate levels to be a part of this. This includes Laurier students and students in the territories as well,” Quinton explained.

The centre will be a research and training facility for faculty members, graduate and undergraduate students alike.

According to Quinton, the building possesses significant space dedicated to laboratories for graduate students and undergraduate assistants.

The building will not be reserved for students within the scientific field or with an environmental or geographical background either.

“If you take issues like water quality, there are chemical, hydrological and biological implications but there are also social, legal and human health implications, so we’re looking for involvement for students and professors on all those other fields as well to become part of this,” said Quinton.

Much to the disappointment of the fine art students and professors at Laurier, the university decided to scrap the program in April of 2007. That was the last year anyone could take a class or get a degree in fine arts.

The total project cost for construction and equipment was approved at roughly 12.5 million by the Laurier board of governors in 2011.

Because of government funding and funding from the complimentary initiatives of the Canadian Aquatic Laboratory for Interdisciplinary Boreal Ecosystem Research and Southern Ontario Water Consortium, who will also be making use of the building, WLU students should not see the building affecting the cost of tuition.