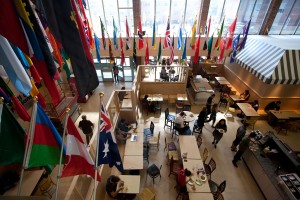 While the official opening of Wilfrid Laurier University’s new dining hall has shown a large improvement with the quality of food being served, as well a large expansion on the number of food stations, it has left many upper-year students both upset and angry with the renovations, specifically with the new rules put in place surrounding the use of the space.

Concerns over new pricing have also come up, as students, staff and faculty without a meal plan must pay an entrance fee before even going into the dining hall.

The prices change depending on the time of day, with breakfast costing $8.00, lunch at $12.00 and dinner for $14.50, which many students have stated on social media sites is too high of a cost.

In order for the new dining hall to properly function within its all-you-care-to-eat meal plan system, a new wall was erected along the confines of the space to ensure that students who don’t pay for the buffet cannot enter.

This wall has drastically changed the physical appearance of the dining hall: it has gone from an open to a confined space that only certain students are allowed to enter.

“It goes against what Laurier sells itself to be as this kind of close-knit community, and then all of a sudden you set up a system where you start segregating people and it’s not a close-knit community at all,” stated Eric Reis, a fourth-year WLU student. “I thought it was just an abomination.”

Reis continued and told The Cord that his biggest issue with the new system was in fact the construction. To him, the wall symbolizes a much larger issue, where upper-year students are being denied access to a space that they should be allowed to utilize.

“It seems like they have set up arbitrary restrictions on people who just want to walk around in [and use] a place they have been for years, unless they pay,” he continued. “To put up high walls and [in doing so] suggest that the students will steal, and then to fence them in like that, as if they’re cattle … in a way you’re de-humanizing them.”

“It’s sort of restricting, especially we already pay tuition and extra fees to use the Laurier campus facilities, so it’s like you’re paying a second time in order to use a space,” he stated.

However, Chris Walker, vice-president of university affairs, spoke to these concerns, and stressed that solutions to these issues are being pursued.

“Study space is obviously an issue on campus, and it was something that going into the process we were very aware of; we’re exploring other options too,” he said.

He continued by stating that additions will hopefully be added onto the new dining hall so students can use the space after hours.

“The way it would have to work is there would have to be some sort of way of [blocking] off the actual dining facility itself and then keeping the seated area open,” he explained. “So we’re trying and exploring the cost of putting a cage in there which would separate the two areas, and then [students] would be allowed to entre through one of the current fire exits.”

Dan Dawson, the assistant vice-president: student affairs echoed many of Walker’s comments, while also maintaining that the newly built wall is completely necessary.

“We respect that some students are frustrated and they have their opinion – we’re not going to oppose their opinion on that – but the wall, while some people are making a metaphorical reference, that’s not what it’s intended to be, it’s to allow this business to operate effectively,” he explained.

However, students have expressed concerns over other details regarding the new systems.

Now, in order to ensure that students are not stealing dishware or large amounts of food, they are not allowed to bring in any bags. In order to accommodate students, 130 lockers have been installed to hold bags while students are inside.

O’Driscoll felt wary of the locker system for many reasons.

“The lockers are only a certain size and not all bags are the same, [or] if it’s a particularly high-traffic day and lockers are full, bags end up on the ground; what’s stopping someone else from taking unwatched bags,” he pointed out.

While Walker stated that students are ultimately liable for all of their belongings, Ryan Lloyd-Craig, director of food services, stated that the area where bags are placed on the floor is secure, as there are always staff members present, and security cameras have been put in place.

Despite the amount of concerns from upper-year students, first years that have meal plans have expressed positive feelings regarding the new system.

“The first year students, who we are designed to set up for, are thrilled with the environment,” stated Dawson. “Once they get in the doors and they have the experience, we’ve had nothing but great comments.”

Lloyd-Craig also explained that a new pre-order system has been put in place to replace the take-out option that is now gone. All students can now order a meal 24 hours in advance, and have it ready to be picked up at the front doors. However, the prices will reflect the all-you-care-to-eat prices of the buffet, rather than a price-per-meal system.

Dawson and Lloyd-Craig concluded by stating that in order to ensure that all students, staff and faculty are pleased with the new system, they will be conducting surveys both on campus and online in order to get feedback.