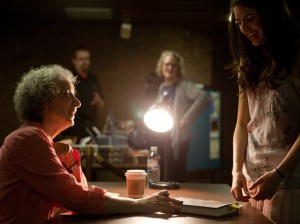 As part of the weeklong “Big Thinking” series at Congress 2012, Canadian literary icon Margaret Atwood gave her take on liberal studies to an enthusiastic crowd of academics and students alike.

“I’m delighted to be addressing anyone, because it’s a sign that I’m still alive,” Atwood joked as she begun her lecture. “People are beginning to wonder, because if you have taken somebody’s work in high school, and even in university, you just know they’re dead. “

“It’s better if they are dead anyway, there’s no copyright issues.”

Atwood retraced her time as a young Canadian writer trying to get published. According to Atwood, who is now 72 years old, becoming a distinguished Canadian author was difficult, and most had to leave the country to not only get recognition in Canada but also in the United States and Europe.

She described being a young Canadian author as, “The grown up version of selling girl-guide cookies.”

Atwood reflected on struggling Canadian authors, including her earlier self, by speaking about finding a central narrative that was distinctly Canadian, which she related to her monograph Survival: A Thematic Guide to Canadian Literature.

With this idea of “survival”, Atwood spoke about how in today’s age, with climate change affecting the environment, there’s a sense that “we’re clinging on by our finger nails.”

“We will kill it [the environment], and in doing so seal our own doom, because you are what you breathe and we and nature were joined by the hip all along,” she added.

She also talked about how technology has shifted in the way people communicate, and how it affects literature.

“There were no personal computers,” Atwood said. “I love terrifying the younger generations.”

In tune to the theme the of the conference, “Crossroads: scholarship for an uncertain world,” Atwood spoke about the importance of humanities today, and that people should not give up on trying to push those fields in academia.

But Atwood asserted that storytelling is still an important part of society. “That’s how we understand our world, through the stories we tell ourselves and one another one about it.”

Atwood titled her talk “Bedtime Stories” because as a child that’s how people learn the essentials of life: through the stories told by their parents. She warned that storytelling is being infringed on by modern societies, including the government that currently runs Canada.

“The world is uncertain, and it has been dark, and it’s always been dark at bedtime,” said Atwood. “[But] we listen better in the dark.”