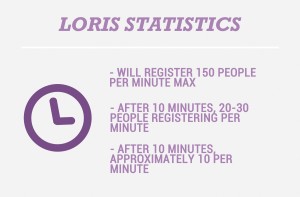 Wilfrid Laurier University’s new time ticket method for course registration had its first run-through this year, and created multiple reactions.
According to Ken Boyd, director of information and communication technologies services at Laurier, registration overall this year was a fairly smooth process.

“A lot of time stamps were great. The ones that had trouble were sciences and anything after,” he said.

Boyd explained that there was an issue with the sciences in the system. When science students tried to register for courses, LORIS would shut down, requiring manual attention from ICT services.

“In science, there’s a course and a lab. If you enter the lab first and then the course, and someone else does the course and then the lab, you’re both locked out against each other and then we have to go in and manually fix it ourselves,” he said.

Under the new time ticket method, the science cohorts who had between .25 credits and 9.99 credits had the most issues, slowing down all cohorts that followed. The best cohorts were upper-year students, particularly arts and business.

“I think it really helps the students, because even though they’re in second-year, there are a bunch of reasons — all legitimate — why they haven’t attained what you would typically consider credits for second-year,” he said.

However, not everyone’s LORIS experience was enjoyable. Patrick Paolini, a fourth-year kinesiology and physical education student, experienced issues and said it was the hardest year he’s had trying to register for courses.

Paolini was away working with no internet contact and only one phone call per week, and asked his dad to register for him. He explained everything, right down to course registration numbers and how to easily come out of the system. However, Paolini’s dad told him two classes were taken out of the system for kinesiology just before registration.

“There’s no room in these classes. People are trying to get in, but LORIS takes three hours to get in, and they get in, but others got in before them,” he said.
Paolini expressed frustration with the university and LORIS, explaining he’s worried about if he will have enough courses to graduate

“I got screwed over because I was working to get money to go to school,” he said.

According to Boyd, ICT services at Laurier are “legitimately trying their best” to improve LORIS and course registration. The department is hoping to implement a new system called visual schedule builder, which will take all of the courses students want to take and create course scenarios for them.

From there, students can choose what limits they desire — such as no class on Fridays or no classes after 4 p.m. — and it will build “literally thousands of schedules,” according to Boyd. The system is expected to be ready by August.

“We are coded for continuous improvement. In some regards, this year was better than last year and last year was miles better than the year before,” Boyd said. “Next year will be better again.”

Below are some twitter reactions to this year’s registration

Loris is killing me, an hour and a half and 0 courses registered for #laurierbbaprobs

At this point, registering for courses is probably way faster using a horse and carriage than loris

Everyone needs to stop searching Loris. Get your CRN codes. #WLUHUNGERGAMES #LAURIERBBAPROBS

When you get this you know loris won… pic.twitter.com/HTGgvVO4BV

Didn't know we are still in the dial-up age #LORIS