Last week, residents of Kitchener-Waterloo were encouraged to get to know their community a little better through the Live Local Challenge. 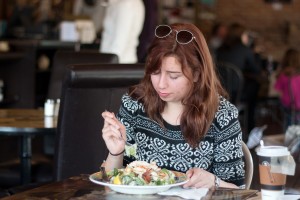 Last week, residents of Kitchener-Waterloo were encouraged to get to know their community a little better through the Live Local Challenge. The challenge, which took place from Sept. 14-20, presented K-W residents with the task of supporting local businesses through only buying local and participating in local events.

In turn, local businesses offered discounts and incentives to participants for the week.

23-year-old Juliana Gomez created the challenge in the hopes of getting locals to explore what the area has to offer. The idea of the challenge was to get people to “eat, shop and play local.”

“We got a really great turnout,” she said. “My big ambitious goal was to get 100 people to sign up and we ended up with a little over 150 I think.”
According to Gomez, around 40 businesses participated as well.

Early last year, Gomez started thinking about the curated Twitter account People of K-W — which locals take over for a week at a time — when she thought of the idea.

“I was thinking what would I do if I did this and how would my week be different,” she said.

From there the idea grew and Gomez promoted the challenge on social media to get the word out.

Uptown Waterloo resident Daisy Arseneault decided to participate after seeing the challenge gain popularity on Twitter. Once she discovered the challenge, Arseneault said she and her husband backed it up “wholeheartedly.”

“I’m a local advocate,” she said. “We’re huge advocates of living local and spending our time locally, and so it was a natural fit.”
According to Gomez, she initially had to reassure participants that the challenge was not meant to be overly strict.

“The challenge is to get you to think about what local is,” she said. “I did give people a way, I guess ‘out,’ because life is flexible and so am I and so is the challenge.”

If peopled “cheated” on the challenge, she gave them the option of donating a toonie. At the end of the week, she collected the toonies which will be donated to Foodlink Waterloo Region.

“I thought it went really well,” Arseneault said. “As the challenge went on, it really made me very aware and put in the forefront in my mind all of my decisions that I made during the week. I really liked that.”

“There were times when I owed some toonies for doing that little fast-food stop — that wasn’t really living local, was it?”
Gomez said the challenge was about getting people to realize what the area has to offer.

“I would hope that when people participate in this they realize all the potential that Kitchener-Waterloo has … they have way bigger impacts on our day-to-day lives than they might realize,” she said.

Gomez is currently gathering feedback from participants and businesses in order to improve the challenge and hopes to do it yearly. Arseneault said she would definitely participate again if it does in fact become a yearly tradition.

“I would do it for the reasons of being able to take stock of how I’m living [and] being able to have a week to be very aware of it.”