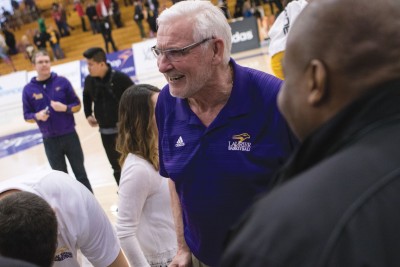 The day after publicly announcing his retirement on Jan. 11, long-time men’s basketball head coach Peter Campbell sat in his office, visibly exhausted from the many phone calls. “Don’t make this tough now,” he joked, flashing a smile, a snapshot of the coach’s personality that carries through his tenure as the Hawks’ bench boss.

The long-time coach spent a total of 31 years coaching university sport — 15 years with the Laurentian Voyageurs and 16 years with the Wilfrid Laurier Golden Hawks. Campbell became the all-time winningest coach in Laurier history with 150 wins in 326 games. He revitalized the Golden Hawk basketball program, which, since basketball’s introduction into Ontario University Athletics, had an overall record of 245-459 in 694 games.

Peter Baxter, the director of athletics and recreation at Laurier, wanted to invest in the basketball program when he arrived in 1998. Knowing Campbell from his dealings in the OUA conference, Baxter sought a coach that could give instant recognition and build a successful basketball program. Campbell competed for the job.

At the time, Campbell was the head coach of Laurentian University. When the Laurier position opened, it was at the same time Laurentian offered the position as athletic director.

“He said I was ruthless,” Baxter joked.

And this was not unusual. Campbell is known for his witty one-liners and honest remarks.

Baxter recalled when Campbell was a little bit grumpy, a little bit overweight and taking it out on the team. Baxter called Campbell into his office and gave him a book and told him to read it.

“I’m not an expert in basketball, but I know how athletes react,” Baxter recalled.

A couple of years later, Baxter was also a little grumpy and a little bit overweight. Campbell walked in with the book.

“I think you need this book. You probably should read it,” Campbell said.

And that was the kind of relationship Baxter and Campbell had. They had the ability to respect each other, call each other out and hold each other accountable. Campbell gave Baxter advice on what he thought was working, and whether or not Baxter thought of a different idea. And that’s what Baxter wanted — people to differ from him.

Kale Harrison, now a Laurier alum, was a staple in the Laurier program.

He made strides with the Golden Hawks and left with accolades such as Canadian Interuniversity Sport second-team all-Canadian, CIS rookie of the year and many modern day records.

But before that, he left high school not recruited by any universities.

Campbell gave him a chance, an opportunity to prove himself as a Golden Hawk.

Campbell took him under his wing and developed him.

In a five-year span, Harrison won a ton of accolades while at Laurier, including the OUA West rookie of the year. He was named a first-team OUA all-star three times, a second-team all-star once and a multitude of Laurier accolades, including the president’s award for male athlete of the year.

And this is Campbell’s favourite part about being a coach — the time spent with the players.

“There’s no better reward to spend five years with a guy, eight months a year, some time in the summer, and the relationship you forge,” Campbell said. “That’s why you do it.”

And that’s Peter Campbell. He’s the kind of guy that gives an athlete the opportunity to make something of themselves after going through the summer unsought, giving special attention to a person and developing them into an incredible athlete.

The kind of guy who embraces hecklers and jokes around with them instead of getting mad.

The guy who knows everyone in the department by name because he made an effort to and helped with training all of Laurier’s student leaders. He added to the department in 1,000 different ways.

And when he was asked how the current Hawks reacted to his retirement?

He answered the same way he always did — a witty one-liner.

“Well, they probably went out and celebrated.”