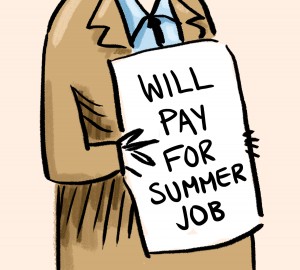 You can’t find a job because you don’t have experience and you can’t get experience if you don’t have a job. This vicious cycle has been frustrating anxious students of all degrees as they approach graduation.

However, this struggle in finding employment is not only affecting those looking to kick-start a career.

For many, it’s just as difficult to land a summer job — and only half of Canadian students are finding them.

Each year the Labour Force Survey of Statistics Canada collects labour market data about how many students aged 15-24 are finding summer employment.

Now concerns are rising about rate of summer 2014.

“They’ve been trending down,” admitted Vincent Ferrao, a labour market analyst for Statistics Canada. “This is for all types of employment; students may be looking for full-time work or even part-time work.”

However, Ferrao explained that students between 15 and 18 have notably lower employment levels.

“The younger teens are looking for their first job, so this definitely pulls down the rate,” he said.

The average unemployment rate over the summer for students age 20-to-24 was 11.2 per cent, while it was 17.4 per cent for those aged 17-to-19.
Statistics, however, may vary across provinces depending on workforce needs.

“Youth as a whole have not been doing as the rest of the population,” Ferrao said. “We also see more employment in the west because we are picking up growth in natural resources […] that’s just a driving source of growth that the east does not have.”

Ferrao also speculates that there are other reasons for unemployment.

“Some [students] are lucky and find work, but some are maybe holding off to find something better,” he said. “A lot of them might also not be in the right time in the labour market or might not even be looking hard enough.”

However, many students firmly believe that the reason why they cannot land a job is because they simply have no connections.

Nepotism  is often perceived as a student’s winning lottery ticket in securing employment.

Carter DeAngeles, a student at George Brown College, said that he got his job in office administration through knowing his employer before hand.

“I consider it more lucky than anything,” DeAngeles explained. “If I hadn’t made the decision to get to know my employer beforehand, I would have never landed the job.”

DeAngeles said he was unqualified for his position and that his employer was fully aware of his limitation.

“We had more of a friendly relationship,” he said. “He knew I wasn’t very educated, but things have worked out so far.”

Others, however, have been frustrated by finding summer work that is not related to their degree or field of study.

Yuliya Chervona, a student of political science, was looking tirelessly for a summer job related to politics, government, or administration. Unable to secure even an interview she worked at a Honda factory in Barrie — the same factory that her father was employed at.

“Every summer it is difficult to find summer work in my field because there are very limited jobs with the governments or private companies,” she said.

“It is very difficult to break into a field if you know no one,” Chervona continued.

Statistics Canada will not be able to release an accurate reading of summer 2014 unemployment rates until August, when the numbers become available.