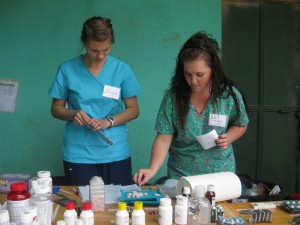 Earlier this month ten health science students from Wilfrid Laurier University, along with 12 bio-medical students from the University of Guelph, travelled to Guatemala with Volunteers for Intercultural and Definitive Adventures (VIDA) to work alongside doctors and give medical treatment to local citizens.

“The main [part of the trip] was clinic days,” explained Nicole Reinders, a fourth-year Laurier student. “We would split up into groups and locals would come in from rural areas, and we could listen to what their problems were and try to diagnose them with something, and give them medication.”

Jaclin Whaley, another fourth-year Laurier student, expanded on the purpose of their trip.

“There were six clinic days in total, and we worked probably eight hours per day. Some people walked from different surrounding villages because they’d never seen a doctor before, and some people waited hours to see us,” she said.

The total cost of the trip — which ran from April 28 to May 10 — was around $3,000 per student. This covered airfare, accommodations, food and VIDA expenses such as medical supplies. While the group brought many donations, they used many supplies already in Guatemala.

Although the students worked alongside qualified doctors, most of their appointments were done independently.

“We did their basic health history, asked them about their primary and secondary health conditions and then when we thought that we had a diagnoses the doctor would come and we would tell them what we learned,” stated Reinders.

Near the end of the trip the students were responsible for giving prescriptions based on their own observations.

“We learned so much just from the first few clinic days,” said Justine Wilson, another fourth year WLU student. “We were trusted.”

While working in Guatemala, the students noticed many differences between health care systems in Canada.

“I think one of the most striking differences for me was that the people there waited so long to see us, and when they finally did get to see us, even after waiting like six hours, they were really grateful and thankful that they actually got to be seen, whereas here if you had to wait like an hour for an appointment, I think people would be really angry and upset,” Whaley stated.

Wilson also explained how her observations made her realize how much Canadians take health care for granted.

“Certain medications we take advantage of … we just take it and it’s accustomed to us but to them it’s a privilege to get,” explained Wilson.

Reinders also commented by stating the importance of treating patients as actual people and not just as medical issues, which is sometimes the case in Canada.

In Guatemala, she explained, the patients were extremely grateful for the help they received, continually thanked the students and even hugged them.

The students were all pleased with their experiences, and hope to apply the knowledge they gained both in the classroom and in their future endeavors.

“It was an amazing experience,” summed up Whaley. “I didn’t think I would have learned as much as I did.”