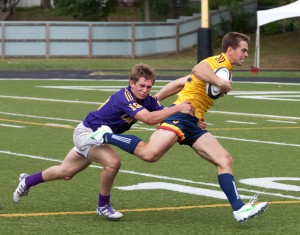 They currently sit waiting for the Brock Badgers to come for a visit after dropping two decisions this past week to the Guelph Gryphons and Queen’s Gaels.

And they’ve yet to score a point.

“Starting the season, we knew that Guelph and Queen’s were tough games to begin with,” said head coach Rob McQueen after Sunday’s game. “It’s not something we weren’t prepared for.”

The Golden Hawks travelled to Guelph to open their season Wednesday and dropped a 45-0 decision before coming home Sunday to host the Gaels.

However, injury and exhaustion got the best of the Hawks as the Gaels scored six unanswered tries, to leave the home team shutout for the second straight game.

“We played 65 minutes of strong rugby,” McQueen said. “We came into the game with several injuries. Unfortunately we played defence for 80 per cent of the game and that just wore us down.”

The injury plague has followed the Hawks right into the beginning of the season, as the majority of their first and second-string players being sidelined.

In Sunday’s match, the sixth string of athletes that the Hawks had dressed filled the centre positions.

“I think today we were sixth in the depth chart,” McQueen said with a laugh. “It’s a bit of a headache, but we’ll get through it.”

According to McQueen, most of the injuries are minor. During Sunday’s match, three more players were injured.

“Everyone’s kind of a day-to-day, bruises, slight ankle sprains, knee sprains,” he said. “It’s nothing that will keep anybody out for more than a week. But it’s just all in the same position.”

As the team remains scoreless in their opening games, the Hawks look toward their meeting with the Badgers to find some kind of spark. But it won’t be easy.

The Badgers come in undefeated, and right off a 104-0 win against the Toronto Varsity Blues.

However, McQueen feels that the game is hopeful for the tattered squad.

“[It’s] a winnable game, and we’ve got players coming off injuries,” he said. “I think the boys are still pretty positive going forward.

“It’s a tough start, but they’re realistic. I don’t think it’s much to be concerned about.”

With the majority of the team for the last two years being in first or second year, the squad is continuing to grow and develop a comfortable niche for the season.

Brock will come to University Stadium on Friday for a 3 p.m. start. Following that, the Hawks will have a hefty 15-day break before they play host to the McMaster Marauders on Sept. 29. Following their date with the Marauders, the Hawks will travel for their next three games before returning home to finish their season in late October.