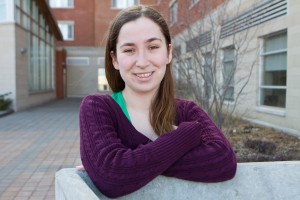 After coming home from the G(irls) 20 summit in Mexico City, an international youth women’s issues conference that ran from May 31 to June 4, Claire Charness couldn’t wait to go back, or even better, to do more for women’s issues from home.

“It was amazing. It was absolutely incredible,” said an enthusiastic Charness, a second-year psychology student at Wilfrid Laurier University. “These girls are now my family, easily. It’s a bunch of people from a bunch of different places, coming together to work on the same issues.”

The summit, which ran before the actual G20 summit later in June, took just one woman between the ages of 18-20 from each G20 country to come to together and discuss women’s rights issues.  According to Charness the group of girls discussed issues such as food security and violence against women, and also attempted to come up with solutions from within a youth perspective.

“Those are definitely two very multi-faceted issues, there really isn’t just one approach to them. We had to consider all those kind of angles when we tried to approach those issues,” explained Charness.

With Canada being recently hailed as the best country for women out of all the G20 nations, Charness noted that her experiences as a young adult are somewhat different from some of the other girls who attended the summit.  For her, creating that dialogue and sharing those experiences is essential to understanding the world today.

“Probably one of the biggest advantages to the summit was that you get that dialogue, and you get to learn from everyone and you get a chance to hear about their experiences and what they do,” Charness continued. “And some of these girls are so inspirational.”

Not only did Charness learn from her fellow colleagues, they also took something from her too.

“I think they learned a lot of my perspective on things, it is a lot different than what happens in Brazil or Saudi Arabia, I think Canada is a really good example of what should happen,” she explained, adding that Canada still has the potential to improve even further in areas such as Aboriginal relations and female political leaders.

“There’s still a lot of things we have to do, and I think that really makes our task a lot bigger,” she added.

Although the summit has concluded and each girl has gone back to her respective country, the work doesn’t stop there. The girls will then embark on a fundraising campaign to raise a goal of $100,000 to support alternative income projects worldwide.

Despite their young ages, Charness believes that it is important that countries and world leaders consider the youth perspective on global issues – their voice needs to be just as loud.

“The biggest thing is that this summit proved that we really need a youth perspective on global issues, you cannot leave young women or young people in general out on making decision on global issues,” Charness concluded.