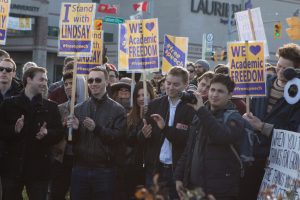 On Nov. 24, a student-organized demonstration for free speech attracted a large number of participants occurred on the Veteran’s Green memorial at the intersection of University and Hazel.

Not too long after the demonstration for free speech commenced, a counter-demonstration in support of trans students began across the street.

Both demonstrations come in the wake of a controversy surrounding Wilfrid Laurier University’s handling of the situation involving graduate student Lindsay Shepherd, who neutrally showed a clip of a debate featuring University of Toronto professor Jordan Peterson to her tutorial group.

Toby Finlay, an organizer for the counter-demonstration and administrator for Laurier’s Rainbow Centre, joined their compatriots, all donned with signs pinned to their chests reading “trans people deserve justice,” in a line facing the free speech demonstration across the street.

In an interview, Finlay claimed that the free speech demonstration they were responding to functions to silence trans voices.

“The realities of transphobia that are really at the core of this issue have been erased under a larger freedom of speech narrative, and so we think that has really functioned to silence a lot of trans people’s voices,” Finlay said.

The freedom of speech demonstration on the other side of the street, equipped with its own microphone and PA system, brought out presenters that included Lindsay Shepherd herself, a Laurier faculty member and speeches prepared by local politicians.

Erik Danudjaja, third-year Laurier student and one of the organizers of the free speech demonstration, claimed that their hope is to get Laurier to adopt a new free speech policy.

“We don’t want to just demonstrate, talk about it for a week, and then forget about it. We actually have a policy in place. So we just came from the President of Laurier’s office, and we handed to the secretary a document detailing how we could improve free speech here at Laurier,” Danudjaja said.

“Our hope is that we can get something along those lines passed here at Laurier so what happened to Lindsay won’t happen again,” Danudjaja said.

Finlay, on the other hand, hopes that the university takes steps to expand on their consideration of trans people.

“We would really like to see them take tangible steps to address this both within the context of freedom of speech and the way the institution organizes around that and takes stances on that with their own task force that they’ve assembled, but also beyond that as well,” Finlay said.

Anton Abaev, Laurier student and another organizer of the free speech demonstration, talked about how the presence of the counter demonstration embodies one of their fundamental aims in promoting free speech.

Counter protester, Milas Hewson, doubled down on the sentiment that Finlay expressed, noting the absences of trans voices in the recent discussions surrounding freedom of speech.”

“I think it’s important that trans voices are included as we move forward,” Hewson said.

“So what we’d really like to see … is that this investigation continues to happen, that the truth of what happened in this classroom can come out, and that we can have this conversation in a way that … actually brings it back to the issue at hand, which is that transphobia is being covered up using this freedom of speech discourse.”