Hawks come up short in 32-18 despite bringing the battle to No. 2 Mustangs

From the moment the Wilfrid Laurier Golden Hawks men’s football team stepped onto the field at TD Stadium, the game was a bloodbath.

Yes, the Western Mustangs dominated the Hawks in their first meeting on Sept. 12, routing them 59-9 at University Stadium. Yes, the Mustangs put up the most amount of points during the season in the Ontario University Athletics conference. Yes, the Mustangs were 8-0 coming into the OUA semifinal date.

None of that mattered when both teams stepped onto the field on Nov. 7.

Instantly, the stadium turned into a battlefield. Fifth-year running back Dillon Campbell, who battled injury all season, was taken out of the game due to an injured ankle, and Western star quarterback Will Finch left the game early in the third quarter after he was reamed by the stout Laurier defence.

But at the end of the day, the Hawks lost to the Mustangs 32-18 and thus were eliminated from the playoffs.

“I feel really bad for our seniors,” head coach Michael Faulds said. “I’m happy that they got a playoff win last week. Guys like Greg Nyhof, Dillon Campbell, tons of these guys that played their last game in the purple and gold.”

“I really feel for them right now.”

The Hawks didn’t go down without a fight, though.

For a second, when the Hawks’ defence held the Mustangs to only 15 points in the first half, and to only a field goal in the first, the lowest amount of points Western has put up in a quarter, the possibility of an upset remained in reach.The defence stood on their heads and held the high-octane Mustang offence to only 17 points in the second half.

But then the offence sputtered.

The Hawks could not get anything going on the offensive side of the ball, with only a field goal and a safety for the defence’s valiant effort.

“The defence played unbelievable. They had us in it from the very start. Offence, it just wasn’t our day. Trying to get it going can be frustrating when you can’t string plays together, but we’re proud of the way our offence battled,” second-year pivot Eric Morelli said.

“Yeah, that’s tough. Dillon had a nice long run, and he’s been battered up all year and that ankle just couldn’t do any more,” Faulds said.

Despite not being 100 per cent, the running back continued to turn heads this season. Campbell rushed for a total of 1115 yards and 139.4 yards per game and put up a record 285 yards during the Hawks’ playoff win against McMaster that propelled them to the semifinal.

“No, not at all,” Campbell said on not being 100 per cent healed. “But you know it comes with the sport. I love the sport so, I’ll do anything to get in.”

“Last game in a Golden Hawk uniform, it’s tough to watch the team battle without me. They did a great job, it’s just Western was the better team today.”

And with that, another few chapters in the Laurier football saga have been written and laid to rest. It’s time to put the pen down and close the book on another storied season for the Hawks. 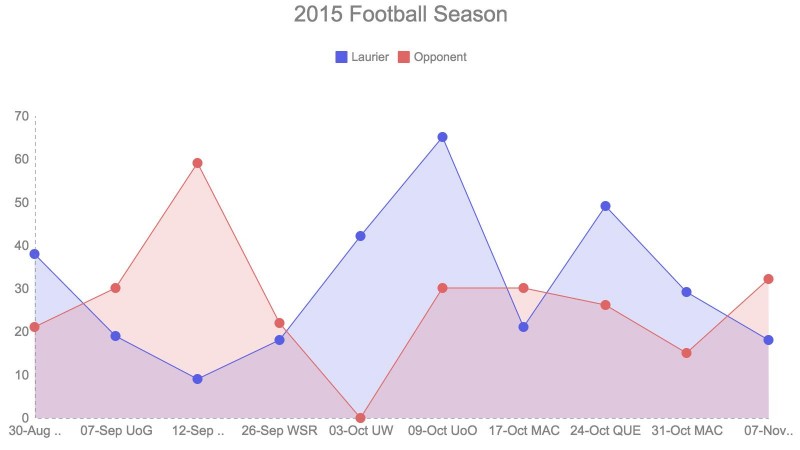