In defence of austerity

Students, faculty and staff gathered in the concourse last week after the job cuts were announced. 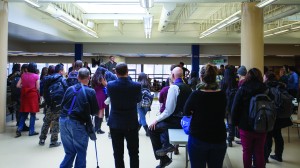 The amount of complaints I’ve heard regarding Wilfrid Laurier University’s budget cuts over the past few weeks has been frustrating.

After voicing the concerns many have with the school, I feel extremely sympathetic to anyone who has lost their job.

But with my sympathy comes an understanding of the university administration’s actions.

These cutbacks aren’t a villainous act of oppression brought on by an elitist, corporate hegemony, but instead are fairly reasonable steps that are needed to reduce the looming deficit.

The fact is that 80 per cent of the Laurier budget goes towards paying salaries and benefits.

And any corporation that’s spending 80 per cent of a budget on workers should not be accused of trying to undermine them. The rhetoric I’ve heard over the past few weeks — that Laurier is somehow trying to hurt our fellow students and teachers — is blatantly misleading.

Some professors and students have expressed the view that in a perfect world, schools wouldn’t run like a business; we would all come to engage in critical thought and leave after four years feeling enlightened.

But that’s not how the world works. I hear a lot of complaints but not enough suggestions about how this budgetary crisis can be solved without these cuts.

What solutions does the university have? Raising tuition is out of the question for a host of reasons, so what’s the viable alternative? Also bothersome is the fact that many students support budget cuts instead of tuition increases, but then try to demonize Laurier when they realize it’s their programs that might be affected.

That only highlights the hypocrisy of this outrage. I’m a political science and North American studies student. I love both my programs and all my professors, but if a serious cut were needed I would understand if it comes at my expense. Moreover, tenured professors are not getting fired, and this is likely the fairest deal for students and the quality of their education. I don’t think many people know how much money full-time tenured professors make. Many of them make $165,000 a year, with a six per cent increase annually.

If the profs collectively agreed to stop the increase for a couple of years, many of these jobs would be saved.

So while the “outrage brigade” is in full force, screaming up at the sky about how our president Max Blouw is out to ruin our school, they neglect the facts.

University students of all people should understand what it’s like to stretch a budget. Sometimes we just don’t have the money to go to a bar or go watch a movie.

I personally had to give up buying more Nicki Minaj posters (I got that calendar though).

The university is doing the responsible thing and reducing its operating costs, and it’s better for us all in the long run.