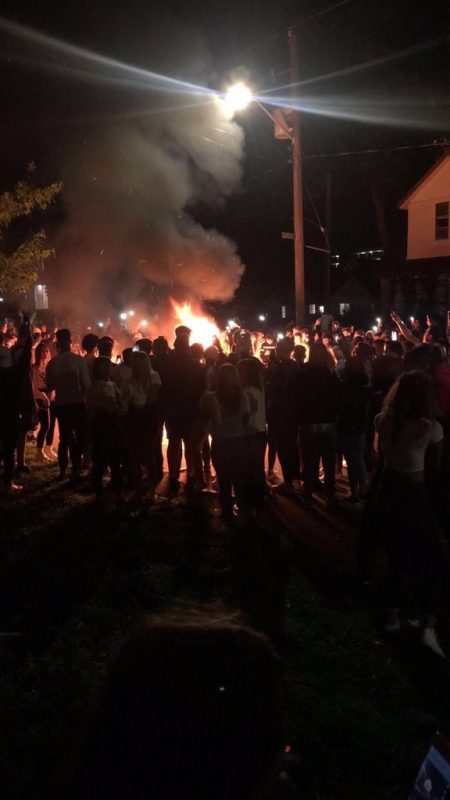 Around 10 p.m., members of the Wilfrid Laurier University Special Constables, Waterloo Regional Police Service, Waterloo Fire Department and Region of Waterloo Paramedic Services arrived on scene in response to the unlawful street party, diverting their attention from other matters.

This event is the most recent in a string of unsanctioned street parties that take place on the infamous Ezra Avenue, yet often bleed into neighbouring streets such as Clayfield Avenue, Bricker Avenue, Albert Street and King Street North.

While the origins of the Ezra street parties are difficult to trace, their increasing size and frequency has become a growing cause for concern among both the Laurier and Waterloo communities.

“It is unclear what started the actual party, but it is clear that it has grown substantially over the years,” said Constable André Johnson of the WRPS in an email statement. “The unsanctioned gatherings on Ezra Avenue have reached a capacity that is unlawful and unsafe.”

During the street party, a couch and mattress were brought into the street, set on fire and jumped over by multiple party attendees.

It is unclear what started the actual party, but it is clear that it has grown substantially over the years. The unsanctioned gatherings on Ezra Avenue have reached a capacity that is unlawful and unsafe.

The fires were extinguished by the Waterloo Fire Department and there were no reported injuries caused by the fires.

On Sept. 9, a 17-year-old male was arrested in connection to the fires set during the street party. He is being charged with one count of Arson, one count of property damage and one count of Mischief under $5,000. He is scheduled to appear in court on Oct. 21, 2019.

In addition to disruption of traffic, increased noise level, property damage and other disturbances, the unsanctioned street parties that take place on Ezra Ave. pose a number of different risks to those in attendance as well as the general public.

“The density of the crowd at these unsanctioned street parties has increased significantly over the years,” Johnson said.

“With crowds of these sizes, the actions of those in attendance could impact public safety. If one person were to throw a bottle into the crowd — or an issue arises where the crowd moves rapidly — it could cause someone to be seriously hurt, or trampled on.”

The parties on Ezra also cause challenges for the emergency services in the Waterloo region and surrounding areas.

“There is a significant drain on emergency resources,” Johnson said.

“There is also substantial cost and resources that go into implementing a plan to address the unsanctioned gatherings and to ensure public safety.”

These risks and disruptions to the everyday working of the region of Waterloo are only expected to increase as the parties on Ezra Ave. continue to grow and steps must be taken in order to maintain control over the growing student community.