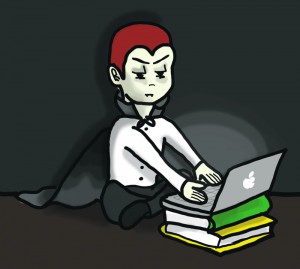 Let’s face it, not everyone enjoys summer the same way. While most people are at the beach enjoying the sand and surf or lounging on decks and patios soaking up the summer sun, some of us are desperately trying to hide in our basements, away from the blinding sunlight and social interaction.
There’s a whole other side to summer that most people never know. As one who walks between two worlds (character class: Sexy Nerd), I think that I’m uniquely suited to bridging the gap between those who are tanned and those who are more, shall we say, melanin-challenged. More accurately, I wrote a list of the top ten summer activities for those of the geekier persuasion. But it’s not just for nerds like me; it’s for everyone, especially for the people wise enough to attempt avoiding heatstroke.

In the wake of the recent blockbuster The Avengers and director Joss Whedon’s deserved mainstream success, what better way to celebrate the popularity of such a colossal nerd than to see how far he’s come?

Whedon’s first passion project was Buffy, and the show’s sharp dialogue and surprising plot twists continue to please audiences today. Plus, a seven-season run means hundreds of hours of television for any viewer courageous enough to take on a challenge. Whether you’re cheering for Buffy or waiting for your vampire buddies to finally teach her to play nice, there’s no better way to spend your summer.

This science fiction blockbuster directed by Ridley Scott comes out on screen June 8, and until then I’ll be busy shaking in anticipation. Scott began his career with a little sci-fi masterpiece called Alien and followed that seemingly un-toppable number with a film called Blade Runner.

His return to the genre after 30 years is a great day for all science fiction enthusiasts. For any vampires interested in seeing Prometheus on the big screen, remember to avoid the matinees — there’s no smoking in theatres.

Between all the corporate retreats to their palace of gold and jumping in the massive piles of money that they make from World of Warcraft, Blizzard Entertainment made a game called Diablo III. The last part of that sentence automatically sent anyone who has played Diablo I or II into frenetic finger spasms and heavy drooling, if that helps to understate its importance. Gamers have been waiting for this game for over ten years and it’s finally here. There’s a reason this is the only video game on the list, it’s the only game you’ll play this summer.

7. Play Settlers of Catan with your friends

There’s nothing like creating a few summer memories with your friends. While nerds and vampires get a bad rap for being solitary loners sometimes, there are plenty of ways that they come together to make friends and build meaningful relationships with others. And by plenty of ways I mean Settlers.

This immensely popular board game is a great way to spend your time indoors, away from the gentle summer breezes that scatter playing cards and carry away the ashes of your former vampire buddies. Catan is a fantastic game of conquest and cooperation that can make any summer a memorable one.

Those might be the four greatest words to ever be combined in the English language. This pseudo-historical look at one of the most popular U.S. presidents was written by Seth Grahame-Smith, the author of Pride and Prejudice and Zombies, and produced by Tim Burton. In theatres June 22, the film is sure to be a serious examination of the life and times of American’s most unabashedly bearded president.

This is one of the best shows on television; chances are if you’ve seen Community you’ve either loved it or consequently have no soul, so obviously it’s a winner for vampires and humans alike. A stellar cast, pithy humour and a willingness to challenge the mould of conventional comedy make this show a must see for anyone this summer. Community’s writers have seen more television and movies than an immortal being with a PhD in Couch Potato, which guarantees that there’s something for everyone.

But why would I read something when I can just watch the show, you ask? Because no matter how you feel about the AMC series, the comics are better. I guarantee it.

I don’t even have to sell this one. If you’ve made use of your eyeballs since 2005 you know about Christopher Nolan’s Batman trilogy and chances are you’ve already got your costume all ready for the premiere.

Just remember that leather cat suits look good on nobody, and dressing up as Alfred is infinitely more suave and comfortable than any other possible option.

2. Watch Game of Thrones (or read the books for bonus points)

It’s just great television. The worst accusation that can be levelled against it is that it contains too much sex and nudity, and I’d hardly call that criticism.

Based on George R.R. Martin’s best-selling series A Song of Ice and Fire, Game of Thrones is an epic fantasy drama with a complex cast of characters, pre-eminently focused on humanity’s struggle for power and unafraid to show its sometimes mortal consequences. Sex + violence + unparalleled storytelling = fantastic TV. Who knew?

Do it, I dare you. If you’re into everything else on this list, you’re only a small step away from making up a character sheet for Grunvar the Destroyer anyway. Just think of it as Skyrim for people who lived before 2011.

There’s always been a stigma attached to D&D, but considering the amount of influence fantasy roleplaying has had on our modern culture, it’s time we gave up our stupid inhibitions.

Whether you’re a casual nerd, a dedicated pop culture historian, or an immortal being with an eternity on his hands, D&D has something to offer you that no book, videogame, movie or television show can: a sense of camaraderie, an exercise in imagination or even just a good time.

Think about it — Grunvar is waiting. And have a great summer.

Fad diets are not the answer to finding a balanced lifestyle

Can you find this missing plush octopus?

How Movember came to be (and where the money goes)