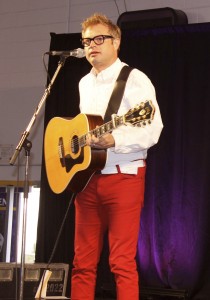 As part of Laurier’s Orientation Week event roster, former Barenaked Ladies front man Steven Page spoke quite candidly about his mental health in an attempt to put a face of normalcy on the negative stigma associated with mental illness.

“We can live regular lives and productive lives while coping with our mental illness or our mental health challenges,” said Page.

Page spoke about how, throughout his 21 years with the Barenaked Ladies he suffered from depression, among other things.

Despite his happy-go-lucky appearance, he explained that “happiness and depression are not mutually exclusive.”

He began by speaking about his very public arrest in 2008, Page iterated that it’s okay to speak about mental illness, and to always seek out support when you need it.

“If you reach out to your friends and family, you will be a burden, there’s no two ways about it,” he said. “It puts stress on your family and your friends whether you’re addressing it or not. And I learned in 2008, when I had just gone through a divorce and was arrested for drug possession, I thought, you know, I’m probably sitting on some of these issues.”

Always relating back to first year students, Page said, “One of the great things about being at a school like this, and a week like this, is you have the opportunity to build relationships and build a community amongst yourselves.”

He empathized the need to eliminate the stigma related to mental illness, especially to the negative connotations associated with seeking counseling or medication.

Beyond merely speaking about mental health, Page played four Barenaked Ladies songs, that provided insight about how his own mental illness shaped his musicianship and creativity.

Combating the notion of the “tortured artists” Page exclaimed that his best work is always derived from the periods where he feels “normal” and is reflecting upon his illness.

“If I could be totally normal… dude, I would take it, in a second,” he said.

In explaining the “meaning” behind one of the Barenaked Ladies’ most popular songs, “Brian Wilson,” Page explained that despite the song’s cheerful melody, the lyrics speak to how he deals with his illness, through immersing himself in music.

In a prelude to the popular song “War on Drugs” about the “suicide fence” known as the Luminous Veil, built under Toronto’s Bloor Viaduct, Page delivered a lasting message about the importance of community working together to combat stigma and making a communal effort to help those with mental illness.

“People are going to fall prey to their own brains,” he said.

“But the best that we can do, as a community, is to hold our arms out, like that luminous veil and catch people if we can, when they fall. That’s what we’re here for.”