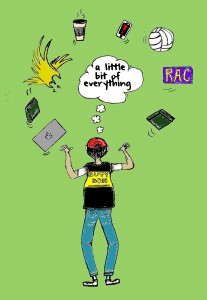 Incoming first-year students living on learning community floors in residence will get to see some new programming initiatives this upcoming year.

This year, 12 of the 118 residence communities will be focused learning communities, with specific themes relating either to students’ interests, such as healthy living, or academics, such as languages and literature.

Dave Shorey, the associate director of residence education at Wilfrid Laurier University, explained that this year will be the largest in terms of the learning communities.

“We actually have what I would consider a break-out year this upcoming fall because we’ve had five new residence learning communities come online,” he stated. “We’ve had a tremendous response … there are pockets of students that really want to have a community that is focused on [their interests].”

Shorey continued to explain that the learning communities were first used in the 2006- 07 year as an attempt to further engage students in specific programming and themed activities in their given residence.

Since then, interest has piqued and the learning communities have expanded and become much more specific.

“We have, in residence, been trying to do this for some years, and for the communities that we piloted we did see some positive growth. It became evident for our department that we needed to invest more time and resources into this project,” continued Shorey.

“As its grown we’ve noticed more benefits in the students; we’ve seen a level of comfort and integration that we’re maybe not seeing in every residence community.”

In order for the learning communities to be as successful as possible, their dons began training a full two days earlier than other dons, and also began planning their programming at the beginning of summer.

Their programming, which was overseen by the residence education office, takes on a more educational role that is reflected in their additional don duties.

Tom Waites, the don of Scholars’ Hall — one of the learning communities for the upcoming year — explained that his specific module for his first-year students.

For his 11 students in Scholars’ Hall, all of which are from differing academic backgrounds, he has sought out upper-year students to team up as mentors for the incoming first years.

They will aid the first-year students not only in terms of their academics, but also in getting involved on campus as well as the greater community in order to promote a healthy, balanced lifestyle.

While some of these initiatives are completely new this year, the Residence Life Office noted that its past experiences in residence learning communities have suggested that they will continue to positively reflect the needs of incoming students.