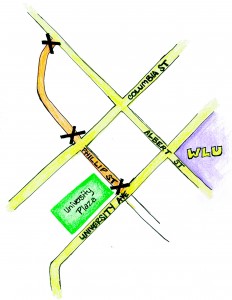 Students intending to drive or take the bus down Philip Street in the near future are in for a bit of a surprise. As part of an intensive reconstruction, the street, which connects major city arteries Columbia and University, will be closed for approximately 16 weeks.

While a seemingly minimal change, this upheaval may still provide a slight inconvenience for people, mainly students, as Philip Street runs along the east side of the University of Waterloo (UW) campus. Construction should be finished by Dec. 21.

The new street promises to have a center turning lane, as well as a lane heading in each direction, bike lanes, and pedestrian crossings.

To some students, both of UW and Wilfrid Laurier University, the street being closed off is of almost no consequence.

The bus routes for the 201 iXpress which some students use on the closed street have simply changed to go around it, causing not more than a five or ten minute delay.

According to the Grand River Transit (GRT) website, the route will go from Columbia St. up to Philip St. and onward to Albert St., before resuming regular routing.

A student from the University of Waterloo, Derek Kohalmi, stated “I’ve had to find other parking at the stadium instead. It wasn’t a big deal, but it’s caused a bit of an inconvenience.”

There may be some inconvenience  to those who live in the buildings near by, or those unwilling to pay for parking.

The street was a regular hub to some students, as it was a location where they could park their cars for the day without having to risk receiving a ticket in the many permit required zones in Waterloo.

Considering that there are few buildings which would concern students in the closed off section, some have had a more stoic approach.

Daniel, a student from the University of Waterloo who declined to give his last name, added “It’s definitely going to slow down the commute to school by a little bit. But other than that, it’s not even really affecting me all that much.”

According to an anonymous worker who is partaking in the Philip St. reconstruction, the students who are at odds with the construction are the reason for it to begin with.

Higher density population places greater demands on old sewage infrastructure in the city, which will need to be addressed into the future as the Region’s population continues to expand.

While it may be a minor hassle and promises to remain so for the rest of the term, the reconstruction brings hopes of a safer street and better sewer system in the future.