Part 4- Back to the drawing board: Looking Forward

This story is the final part in a four-part series released by The Cord. Part One can be found here. Parts Two and Three can be found here. The series discusses alleged accounts of sexism as well as various dysfunctions which were said to be present amongst the Students’ Union 2017-18 board of directors.

As the 2017-18 board of directors’ tenure is now over and a new set of individuals have taken their place, reflecting on the past conflicts and dysfunctions gives the new directors an opportunity to learn from the past board’s shortcomings and move forward, striving towards fostering a strong presence on the board table.

Although almost all directors who spoke to this great imbalance flirted with the possibility that this lack of female representation comes as a result of the way women were treated this past year, however, also pointed to the fact that this year is not the first time there is a gender imbalance on the board.

“I think that the board didn’t facilitate an empowering environment for women at all. People see that,” Rezkalla said.

Since 2013, as per The Cord’s past reporting, there has been a significant imbalance with regards to the ratio of female-to-male directors. In the past six years, there have been two female presidents. In this same time frame, there have been zero women in the role of chair and CGO of the board, and only one vice-chair of the board. 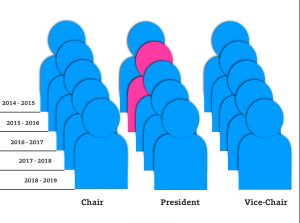 The Cord reached out to Lana Toameh, the sole woman on the current board of directors, who consented to an interview regarding her thoughts and experiences on being on a board with all men and, moving forward, how to continue to encourage female representation.

However, Adam Kovacs, the current chair and CGO of the board, requested that The Cord refrain from publishing Toameh’s interview, in order to follow Students’ Union policies that state only the chair, being himself, is able to speak on behalf of the board.

Although female representation on the board is lacking, many directors agreed that this imbalance stems from lack of empowerment and encouragement.

“The board has to take the responsibility and the onus that if we don’t have great representation of a particular gender is partly because we didn’t do enough to get those individuals to run,” Plummer said.

In fact, reaching out and encouraging women to become directors is only one step in striving to foster a diverse board of directors.

Indeed, it does seem it is the role of the board and the Students’ Union to recruit a diverse group of individuals to run for the board of directors that reflects the diverse population of the student body they represent; however, some prior directors claim the treatment that Rezkalla and Wojtanowski faced on the board could have had a negative on this year’s imbalance.

“We see this everywhere, there’s females in general [that] don’t feel empowered enough to take that position of power and to feel that and to not have that self doubt and to really just take control of their situations,” Wojtanowski said.

“I think that this year, with my experience that I had on the board and if anybody had watched even one or two meetings in consideration for running, I think it definitely would effect my decision to run if I was in their shoes.”

In this way, women considering running for the board who had been paying close attention to meetings which took place in 2017-18, could have seen the way which Rezkalla and Wojtanowski were treated by the men on the table.

“If a female is at a meeting or watching the videos or talking to the board members and they feel like sexism is present at that executive level, then if I was a girl, I wouldn’t want to run either,“ Hakim said.

Looking forward, prior directors hope that the new board take the initiative and necessary steps to recruiting a more diverse group of individuals.

“The board has to take the responsibility and the onus that if we don’t have great representation of a particular gender is partly because we didn’t do enough to get those individuals to run,” Plummer said.

Plummer feels, however, that although there is a gender imbalance on the board, the Students’ Union as a whole can be considered to be balanced as women are in the majority of Plummer’s newly hired executive team for the 2018-19 year.

“Looking forward for next year, I’m hoping that the chair and CGO and the board does a good job of going to marginalized groups’ centres, but also, empowering them to run for these positions,” Hakim said.