Earlier this week, Lindsay Shepherd filed a $3.6 million law suit against Wilfrid Laurier University, claiming the school’s treatment of her has deemed her unemployable in academia.

The unproven claim alleges harassment, intentional infliction of nervous shock, negligence, amongst others. 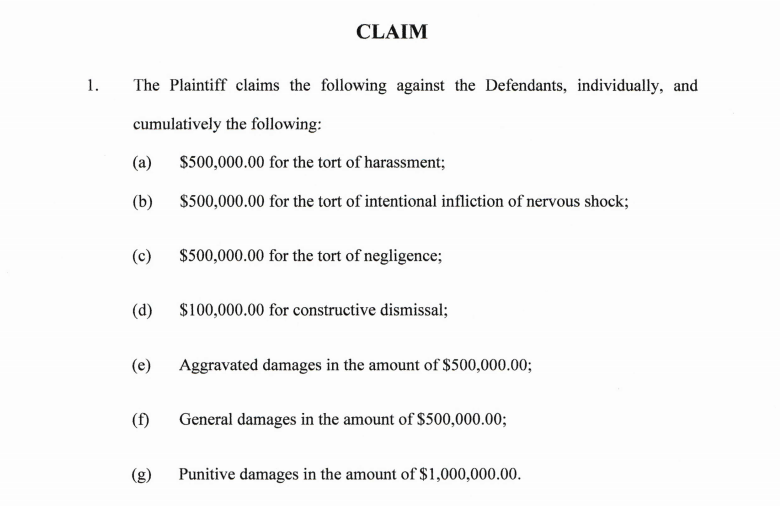 The statement of claim names Laurier, as well as Nathan Rambukkana, Herbert Pimlott, and Adria Joel — the three individuals involved in the original incident surrounding Shepherd’s tutorial in November.

“The attacks on Shepherd have rendered her unemployable in academia resulting in her abandoning her previous ambitions of obtaining her Ph.D. or even teaching at a University as a Masters graduate,” the statement of claim reads.

“Shepherd has suffered nervous shock as a result of the conduct of the Defendants which was the foreseeable and intended result. In the alternative, it was the reasonably foreseeable outcome of their conduct and the Defendants were negligent in their treatment of her.”

I can handle all this, but universities need to know that this stuff is unacceptable. Despite ppl urging me since Nov, I didn’t want to sue. I still feel ambivalent about it. But the harassment and discrimination complaint (details are confidential) was the final straw.

Laurier has 30 days to file a defence in response to Shepherd’s suit.

In response to the law suit, Laurier provided a statement iterating that the claim “is one perspective of a legal matter issued in pursuit of a financial claim” and that “Laurier will vigorously defend against this statement of claim.”

The controversy surrounding Shepherd began last November when she showed her tutorial class a TVO clip of a Jordan Peterson debate. After what was initially said to be a complaint about Shepherd’s tutorial, Rambukkana, Pimlott and Joel sat down with Shepherd, reprimanding her for showing the video.

The incident made international headlines after Shepherd released an audio recording of the meeting, causing controversy surrounding freedom of expression and rights social justice to envelope Laurier’s campus.

Howard Levitt, a Toronto-based employment lawyer, offered his services pro-bono to Shepherd after the initial November incident; however, Shepherd has not pursued any legal action until this week.

Shepherd’s motives behind the law suit, according to Levitt’s understanding, is to enforce consequences to those who, she alleges, have treated her in an “abusive” manner and ultimately censor free speech.

“My sense of the matter is that she doesn’t think that the people who acted the way they did should go unpunished,” Levitt said.

“My view of her intent is that she wants to make sure the people who try and suppress freedom of speech on campus understand that there’s a price to pay.”

According to the statement of claim, the three individuals named in the suit “lambasted Shepherd, viciously attacking her personally, falsely alleging that there had been a complaint or complaints about her tutorial.”

“The conduct of the Defendants was objectively outrageous and flagrant. They had reckless disregard for the fact that the foreseeable consequences of their conduct would cause Shepherd to suffer emotional stress which it did,” the claim reads.

Although Deborah MacLatchy, president of Laurier, and Rambukkana, Shepherd’s supervising professor, issued public apologies to Shepherd, Shepherd’s statement of claim suggests that both apologies were forced, alleging that Rambukkana “continued to lie” about the nature of the complaint despite his apology.

In MacLatchy’s apology, she announced that a third party fact-finding report would be conducted to neutrally gather and assess the facts surrounding the incident.

The report ultimately found that no formal complaint had been filed against Shepherd’s tutorial. The report also provided suggestions to MacLatchy and the university moving forward.

“Laurier remains dedicated to its core values, which include a commitment to intellectual inquiry, critical reflection and scholarly integrity while striving to be a supportive and inclusive community. Since Ms. Shepherd first raised her initial concerns, the university has taken numerous measures to address the matter,” read a statement from Laurier.

As per the reports’ suggestions, MacLatchy launched a task-force assigned to create a Statement of Freedom of Expression for the university.

In April, the task force proposed a draft Statement of Freedom of Expression and correspondingly held a town hall meeting in which the Laurier community was invited to attend and provide suggestions to the draft statement.

Since then, the task force has implemented many changes and suggestions. The new version of the statement was endorsed by Laurier’s Board of Governors and approved by Laurier’s Senate on May 29.

Despite Laurier’s actions reiterating their commitment to free speech and intellectual discourse over the past few months, Shepherd’s statement of claim notes various other incidents and individuals which, Shepherd alleges, contributed to her mistreatment.

The suit discusses Laurier professors Peter Urquhart, Alicia Sliwinski and Judith Nicholson — all of whom, Shepherd claims, contributed to the “toxic environment” that was created for Shepherd.

“It doesn’t sue them, it simply talks about … a pattern of abusive treatment by the university, who has allowed her to be mistreated and hasn’t done anything about it,” Levitt said.

In the claim, Urquhart is said to have allegedly undermined and embarrassed Shepherd when he attended her subsequent tutorial after the initial incident in November. It is noted that Sliwinski allegedly asked Shepherd to refrain from using her laptop in Sliwinski’s class to ensure she was not being recorded.

Nicholson, Shepherd’s supervising professor throughout the winter term, is said to have had various minor disputes with Shepherd throughout the course of the term.

One dispute revolved around Shepherd’s Twitter account, on which she tweeted a photo of Nicholson’s syllabus, criticizing the use of land acknowledgements.

I wonder how indigenous people feel about the holier-than-thou "SJWs" who use land acknowledgments to virtue signal. This land acknowledgment is on a course syllabus. I see them in email signatures too. (If you don't know what these are, look here https://t.co/heCa5yfWv3) pic.twitter.com/TV1pQWWcGs

Parents, get your children 23andMe kits so that their 0.1% Aboriginal ancestry can get them field trips, free food, and scholarships! Not that you have to prove it anyways — no official paperwork required!

I wonder what indigenous people think of this "self-identification"? pic.twitter.com/2NOgOXCQak

Nicholson, Urquhart and Sliwinski have not yet voiced their views and perspectives on the claims to the media or public.

Since the incident revolving Shepherd’s tutorial in November, Shepherd founded Laurier Society for Open Inquiry — the club has since held numerous events in a series entitled “Unpopular Opinion Speaker Series.”

The first speaker was Faith Goldy, who is known for her ties to the right wing and far-right media publications, such as The Daily Stormer and The Rebel Media.

More recently, Shepherd and her club invited Frances Widdowson to campus to give a speech entitled entitled “Does University Indigenization Threaten Open Inquiry?”

Both speakers sparked counter-protests on campus, bringing Laurier students and community members together in order to stand up for rights of social justice.

Lastly, the statement of claim discusses Ethan Jackson — a graduate student at Laurier — who allegedly launched a complaint against Shepherd in the winter term, resulting in a formal investigation to take place. 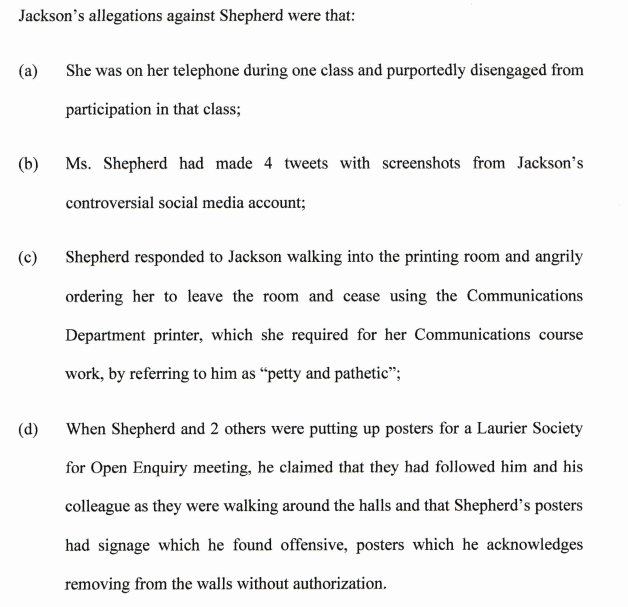 Shepherd suggests in the claim that the complaint was “frivolous,” “was inherently self-contradictory, ludicrous and narcissistic.”

“I think this law suit is part of a struggle against those who use political correctness to suppress free speech and making them pay the cost of that directly,” Levitt said.

“I understand Laurier is already suffering as a result of the way it’s handled this … by having the greatest decline in student enrolment of any university in Ontario this year.”

According to statistics from Ontario Universities Application Centre (OUAC), Laurier has already seen a decrease in student enrolment for the upcoming fall academic term by 15 per cent.

OUAC’s data shows, as of this past June, that Laurier decrease is indeed the largest in comparison to all other universities in Ontario.

According to The Record, Laurier’s enrolment services say the decrease is strategic and does not necessarily correlate to the campus controversy. In fact, the number of first-years beginning this September is still considered a large size for Laurier, noting that Laurier’s enrolment has increased by approximately 15 per cent over the past four years.

Shepherd’s statement of claim is currently unproven and has not yet been tested in any court of law.