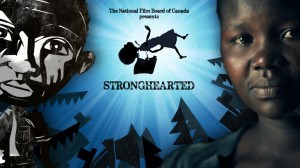 After the infamous release of Invisible Children’s Kony 2012, the name Joseph Kony has become ubiquitous.

Yet, like most mass media sensations, Kony coverage ceased almost as quickly as it appeared.

However, award-winning documentary filmmaker and journalist Jodi Martinson is using the skills of her trade to tell the story of a young woman who entered the inner-circle of Kony’s Lord’s Resistance Army (LRA).

Kidnapped by the LRA at the age of 12, Evelyn Amon was forced to become one of Kony’s many wives, or rather, one of his sex slaves. Evelyn endured over 11 years of abuse and bore three of Kony’s daughters. Yet against all odds she managed to escape with two of her children.

Produced by the National Film Board of Canada, Martinson’s recently released animated short, Stronghearted, depicts a poignant scene from Evelyn’s childhood: her first encounter with Kony.

Weaving together wood-cut style animation by Kunal Sen and actual footage of Evelyn, the film poignantly portrays Evelyn’s story, while still leaving much to the interpretation of the audience.

Keeping within the journalistic tradition, Stronghearted tells a powerful story, which Martinson believes to be more long lasting than the typical activist approach.

“At the end of the day you don’t come away with easy solutions and quick fixes. If it were easy, we would have solved these problems,” she said. “But it’s not easy and so continue to look for stories that can help shine a light on what we can actually legitimately do to help atrocities from happening in the future.”

Citing influences such as Waltz with Bashir, Martinson’s animated documentary-style focuses on the notion of memory. Instead of trying to portray an objective view of events, Martinson seeks to depict Evelyn’s personal opinion of what happened in a pivotal moment of her life.

Like many graphic novels, the almost-abstract animation and dark colour scheme creates a sort of blank slate, allowing viewers to project themselves onto the character of Evelyn, helping them to become more fully immersed in the story.

Juxtaposing the animated sequences with shots of the “real” Evelyn helped to ground the film.

“Evelyn is still a living, breathing person very much still in the middle of her struggle,” explained Martinson.

“So it also felt like it was important that we saw her in the present day so we couldn’t just dismiss this as a fiction. This is a real story that really happened.”

Martinson became privy to Evelyn’s story while pursuing her Masters of journalism at University of British Columbia. Within her first week, she was approached by professor Erin Baines, who had been doing work in the conflict regions of Uganda at a rehabilitation centre for child soldiers. Also at the centre were women, like Evelyn, who had been wives to top ranking commanders in the LRA.

“Erin thought, in a way, this is so typical of NGO’s and researchers, we have totally ignored the pivotal role that some women played in this conflict,” said Martinson.

“I met Erin and she said, ‘Do you think you’d want to make a documentary about that?’ And I said, ‘Yeah!’”

Eventually creating a feature-length documentary about both Evelyn’s childhood and life following the LRA, Martinson thoroughly enjoyed working with her young and passionate, four-person team on Stronghearted.

“This is a story we’re committed to because it’s a story we really, really want to tell. And that was so refreshing,” she said.

Evelyn currently lives in Uganda with her two daughters fathered by Kony, an adopted daughter, as well as a daughter fathered by another man.

Questions about Evelyn’s safety and security are still an issue as Uganda is still entrenched in conflict. Despite these concerns, Evelyn is adamant about sharing the true nature of her experiences.

“Evelyn has never really been surprised by my or anyone’s efforts to tell her story. I mean, she’s such a strong person who has such a strong sense of her place in history,” said Martinson.

“I’m sure she disagrees with me on some of the choices I made and agrees on others and I’m pretty okay with that. I think part of good story telling also reveals the shades of grey in the character,” she finished.