Kitchener marks 100 years as a city 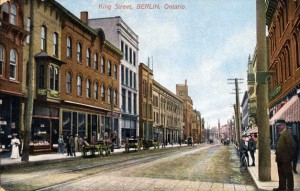 This year, Kitchener is celebrating its 100th anniversary of becoming a city, an event that has inspired locals to appreciate each other as well as the progression of their community.

To commemorate Kitchener’s latest milestone, the community took part in an extravaganza called “Celebration of Cityhood” on June 10.

The event, which took place in Downtown Kitchener, offered the community live musical performances from iconic periods in music history, art, interactive historic activities, multi-cultural performances and a variety of other entertainment.

Jeff Young, the manager of special events at the City of Kitchener, claimed that the event was a way to not only bring members of the community together, but also a way to remind them that the diversity in the region should be appreciated.

“No matter what area of town you live in or what religion you believe in, we want to break down those borders because this represents everyone being a citizen of Kitchener,” Young explained.

Young also revealed that Kitchener would be attempting to break a Guinness world record on July 15 by partaking in what they are hoping will be the world’s longest picnic.

According to city councillor Dan Glenn-Graham, part of what has helped make Kitchener a desirable place to live in for the last 100 years is its shared access to various amenities in the area.

“We’ve got a number of cultural amenities that put us in the centre of the region,” Glenn-Graham said. “We have a lot of entertainment amenities that will help with Kitchener’s growth.”

The celebration of 100 years as a community has inspired the members of council to seek a variety of different ways in which they can improve Kitchener. Maintaining the powerful sense of community is one of the biggest priorities for Glenn-Graham.

“Our goal for this vision is to listen to the ideas and concerns that the people have in order to move our journey forward,” he said.

“Our greatest concern is to use technology and our own resources to make sure that we are listening to people who are actively seeking our help.”

Glenn-Graham praised the community for not only celebrating the constant changes Kitchener has made in building its identity, but for also maintaining elements of the history which is founded into Kitchener’s everyday life.

Since 1912, Kitchener has been considered home by hundreds of thousands of people and has provided an impressive account of historical events that have been provided as the catalyst for the community. From Queen Victoria’s son visiting Victoria Public School in 1914, to being named the tenth-biggest urban area in the country in 2011, Kitchener’s history is at its peak of the public’s interest.

The history of Kitchener and its foundations helps to contribute the prestige of living in the area, according to city councillor Kelly Galloway.

“You have the opportunity to see all of the history here in Kitchener,” Galloway shared. “Being on the committee has really opened my eyes to everything that has gone on.”