Ideas put to the test in Three Minute Thesis competition 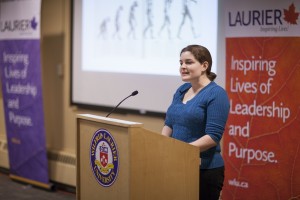 Cory Scurr will be representing Wilfrid Laurier University at the provincial Three Minute Thesis (TMT) competition in April. He won Laurier’s competition this past Tuesday.

“Friends ask me, family ask me, colleagues ask me, ‘what are you studying?’ [and when I tell them] they kind of look at me with this dry, blank stare on their face. So this was a challenge to myself to prove that what I’m studying can be digested and enjoyed,” said Scurr.

Scurr, a PhD history student, won with his thesis Cold War Warrior? Diefenbaker and Canadian-Soviet Relations. He was one of thirty students who participated in the competition, which took place in the Paul Martin Centre.

TMT involves the participation of Laurier masters and doctoral students, who are given just three minutes and a single PowerPoint slide to present their research to a panel of non-expert judges.

“It’s a professional development opportunity for graduate students,” explained Michael Bittle, communications coordinator for the faculty of graduate and postdoctoral studies who organized the event. “Public speaking is a skill that academics and non-academics think is an essential skill.”

This event began in Australia in 2008 as a way for graduate students to showcase their research and quickly grew to be an annual contest held by universities globally.

“This is the second year we’ve had it at Laurier,” said Bittle. “This year has been similar to last year in that I’m impressed with the diversity of the work done here at Laurier.”

The winner of the contest received a $1,000 prize, the runner-up received $500 and the two honourable mentions received $250 each. In addition to the winner, the runner up also has the opportunity to represent Laurier at the upcoming provincial competition, which this year is being hosted at McMaster University.

“You’re going against the best researchers in the province,” said Bittle. “There are so many people doing so many types of different research that are all important in their own ways and that’s why TMT is so important. It gives the community a chance to engage in that research where they normally wouldn’t have that opportunity.”

In the years coming, Bittle shared that he would like to see the competition grow.

“I’d like to see an online component, maybe like a ‘people’s choice’ sort of idea. These are things we are thinking of to try to bring in the community.”

Three of the panel judges were active members of the community and only one judge was a Laurier professor.

“It was a variety of competition,” shared Scurr. “There were five or six people who easily could have won and gone to McMaster; the competition was solid.”